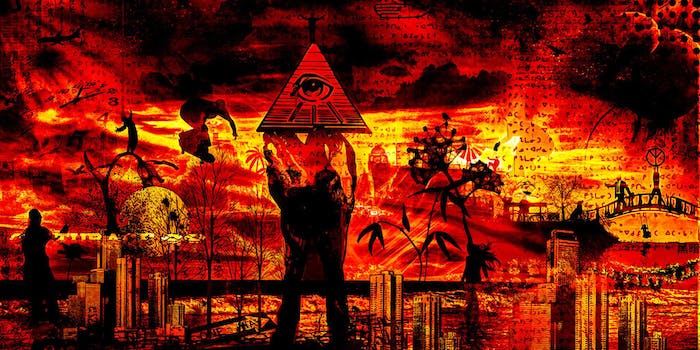 For a secret society, the Illuminati must have a great press agent, because they are everywhere these days.

For a secret society, the Illuminati must have a great press agent, because they are everywhere these days.

According to a video from author and professional Illuminati conspiracy theorist Mark Dice, posted this week to his YouTube account, their latest conquest appears to be the world of feminism. Dice’s theory is based on the obvious Illuminati symbolism that was all over the MTV Video Music Awards last Sunday, but his evidence is based less on what was there than the Internet’s history of reading the Illuminati into everything, making connections that simply aren’t there. They are a phenomenon of the Internet that—in many ways—is a symbol of the Internet itself.

Of course, the wider obsession with the Illuminati predates the computer; it almost seems quaint to try to put the origins of the Illuminati in any kind of rational, historical context at this point, but it’s not impossible. Good old Merriam-Webster defines the word “Illuminati” as, “any of various groups claiming special religious enlightenment” or “persons who are or who claim to be unusually enlightened.”

But the shadow organization that people speculate about today has roots in a secret Bavarian society which sprung up in Germany around 1776, one that was chronicled by Scottish scientist John Robison in his text, Proofs of a Conspiracy. Whatever tangible traces there were of this original Bavarian organization have long faded since today, but it is Robison’s portrayal that informed the modern image of the Illuminati as an insidious force bound on tricking new members into becoming a part of a concealed segment of the upper-class which controls all of society (basically, they are the ultimate “one-percenters”).

In the last century or so, the Illuminati has become a kind of cover-all for hidden, cult-like powermongers. So in that sense, the generic idea that they are a special group of the “unusually enlightened” actually adds up.

It’s funny, because despite the supposed invisibility of the Illuminati, pretty much anyone you talk to in 2014 has one idea or another about who they are. The Illuminati’s presence in pop culture has never been bigger (proving that maybe you don’t have to be so enlightened to join their ranks after all). And everyone from Jay-Z to Sarah Palin has been linked to them in recent years.

But what’s really scary is that this 28 percent of Americans who believe in a “secretive power elite” is only 9 points behind the 37 percnent of voters who have decided that global warming is a myth; that’s right, conspiracy theories are almost as prevalent in today’s America as scientific ignorance.

The Internet doesn’t help any of this, as the increased access to information, and thereby to misinformation, plus the possibility to connect people who hold similar ideologies, has taken things up a notch. As Nick Harding at The Independent reports:

There are several reasons why conspiracy theories are increasing. Mainly it is because the Internet has made it easy to propagate rumor and supposition on a global scale. Social networking sites allow conspiracy theorists to seek out and link with like-minded individuals. Whereas past conspiracies, like those surrounding the death of JFK, took years to formulate and disseminate, today’s conspiracies develop almost organically. Immediately after 9/11, the Internet was abuzz with individual voices questioning the official version of events. These nebulous ideas were able to crystallise as theorists discussed and developed their ideas and formed into a set of theories adopted by groups such as the 9/11 truth movement.

To be fair, in a post-Snowden America, some of this increased paranoia is understandable. The Internet’s potential for surveillance is real and very scary. Bearing this in mind, it’s a wonder that modern technology hasn’t made conspiracy theorists of us all.

Yet the concern centered around the Illuminati in particular is something different. A lot of their ability to captivate stems from the way in which you can put almost all conspiracies under this one tent. The Illuminati encompasses the global vastness of the Rothschild conspiracy, which takes an anti-Zionist stance against one of the world’s most powerful banking families.

But the threat of the Illuminati is also political enough where it shares implications with the “New World Order,” which refers to a totalitarian government that will one day control every country on the planet. Then there’s the way the Illuminati play on Western curiosity about Freemasonry, which Americans can trace all the way back to the founding fathers.

New York magazine’s website features a comprehensive breakdown of popular conspiracy theories—with a nice piece on the Illuminati by Mark Jacobson. The issue, Jacobson contests, is that the more we put under the Illuminati’s brand, the less we really know about them. This goes back to Shermer’s assertion that one conspiracy only leads to another, but this also means that one conspiracy then discredits another. As Jacobson attests, if you look at all of them in a row, any sense of coherency goes out the window.

It takes no big scramble of the anagrammatic logos to ascertain that the name Blue Ivy, initial product of Jay Z and Beyoncé’s Rosemary’s Baby–like melding, really stands for ‘Born Living Under Evil Illuminati’s Very Youngest.’ Everyone knows that. What we want to hear is what we don’t know, a hitherto undisclosed item about the mysterious Illuminati controllers. Therein lies the problem, because whether you identify them as the descendants of the Knights Templar; the keepers of the Federal Reserve with their 33rd-degree, Pyramid-meets-the-Eye mammon; or the shape-shifting reptile agents of Lucifer himself, one thing about the Illuminati always remains the same: The more you know about them, the more unknowable they become.

This is another reason why the Illuminati holds so much appeal in the age of the Internet: they are a rabbit hole. Once you start clicking, it gets harder and harder to stop. They play on the most basic elements of the curiosity gap to link you from one part of the conspiracy, to another to another.

This is why the “ILLUMINATI EQUALS EVERYTHING!” mindset creeps up so casually. The rabbit hole is deep, and while it’s hard to take seriously at the beginning, it’s not as hard to buy into once you’ve spent hours exploring it. That’s why it doesn’t matter if they’re unknowable, the point of the Illuminati is in the pursuit; or to put it another way, it’s in the questions, not the answers.

In the end, once you’ve thoroughly examined the seemingly infinite mythology, once you’ve seen how big it is, and how impossible it is, and you only have two options. The first is that you realize the ludicrousness of trying to link these things together and that doing so is nothing but an absurd extrapolation of disparate pieces of information. The second is that you become alarmed at the idea that there are things you don’t know, and decide to grasp at straws to for any kind of larger understanding of the world, which ultimately folds in on themselves

Sometimes, those in the latter camp are just ridiculous, like David Icke and his “lizard people” theory. Other times, they are obnoxious and partisan, like Alex Jones and his comments about Michelle Obama. But either way, they are inherently destructive to rational thought.

Then again, when Public Policy polling reminds us that “4 percent of voters say they believe ‘lizard people’ control our societies by gaining political power,” a showing which would surely make David Icke proud, maybe we’ve reached a point where rational thought is at a premium. But for the Americans who are as smart as Weird Al, it’s best to put down the tinfoil, chuckle at the Illuminati, and just walk away.

Photo via Artwear Revolution/Flickr (CC BY 2.0)