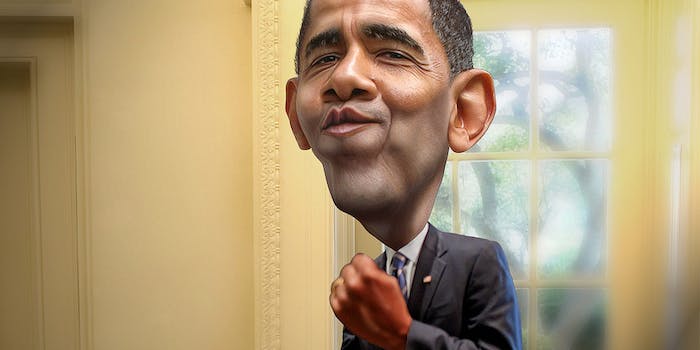 The woman who interrupted Obama had a point, but no one is listening.

Hosting an LGBT Pride reception at the White House, a frustrated President Obama spoke in no uncertain terms to an audience member interrupting his remarks to a standing room only crowd. As he continued on script about how hopeful he was about what can be accomplished for LGBT civil rights, an undocumented transgender Mexican woman in the audience decided she, too, would be heard.

During Obama’s remarks, Jennicet Gutierrez voiced an issue that’s been otherwise swept under the rug: the deportation and detention of undocumented immigrants. “President Obama, I am a trans woman, undocumented,” she yelled over the crowd. “I’m tired of you, I’m tired of the violence we’re facing.”

If the headlines are to be believed, Obama shut down a “heckler” and put her in her place—as though the activist’s intervention bore no substance, a mere round of ad hominem attacks directed at the president. Now, Obama is being cheered on as a badass hero in this context, for demanding the respect he deserves—in his house, no less.

The event itself was a White House reception with a relatively less hostile crowd compared to other public events, town halls, or scheduled appearances.  Surely, in a room full of people to whom he’s offering support, reassurance, and a listening ear, Obama had the option of smoothing out the situation, as he’s often done before. This time, he chose not to.

Gutierrez spoke to a deep disparity with dire implications for undocumented persons who are queer, trans, and/or gender nonconforming. Although Obama took executive action on immigration last November, the work is far from over. Many of Gutierrez’s counterparts being detained or deported still experience or live under the threat of violence every day.

As the New York Times reports, 35 members of Congress sent an open letter to the secretary of the Department of Homeland Security on Tuesday expressing concern about undocumented queer and trans treatment by Immigration and Customs Enforcement. The letter notes, per the Times, that they are “extremely vulnerable to abuse, including sexual assault.”

One could understand, then, why Gutierrez took the opportunity stage a protest about the issue, even if it meant interrupting an elected official’s remarks. Interventions from activists don’t always come at the most convenient times or in venues most would consider “appropriate” or “respectful.” Oftentimes, protest is an plea to the centers of power, from those who don’t have the same access and institutional clout held by officials to create changes their community so desperately needs.

The relative lack of regard for the plight of undocumented LGBT people is part of the mainstream LGBT movement’s recent history.

So far, though, most reports haven’t captured Gutierrez’s side of the story; she’s reduced to the status of “heckler.”

“You’re not going to get a good response from me by interrupting me like this,” Obama said, before asking security to escort Gutierrez away. In fact, as officials escorted Gutierrez away Wednesday night, another attendee, likely one of the many who jeered and booed her protest, had a sassy parting shot for her: “Bye, Felicia.”

While we can’t be sure that comment came from someone who doesn’t care about undocumented immigrants, the relative lack of regard for the plight of undocumented LGBT people is part of the mainstream LGBT movement’s recent history. It’s a disservice many national organizations are now trying to remedy, in order to overcome notions that the mainstream movement is only effective for white, gay, cisgender, and affluent men—many of whom were likely attending the Wednesday gathering.

For example, when the Defense of Marriage Act and Proposition 8 cases had their day at the Supreme Court in March 2013, staffers representing the United for Marriage Coalition—which included a number of organizations banding together on the issue—suppressed undocumented and trans attendees. As the Advocate reported, one speaker was told not to reference their undocumented status. Meanwhile, transgender attendees were told to lower the trans pride flag to keep it out of the view of TV news cameras, allegedly by a Human Rights Campaign representative.

The coalition eventually apologized and, in the time since, many mainstream LGBT civil rights organizations have taken steps to elevate and substantively incorporate justice issues for undocumented queer and trans immigrants into the larger agenda.

Leaders of mainstream groups, with clout, donor dollars, and lobbyists at their whim, have more direct access to the halls of power. Gutierrez attended the White House reception as a representative of the organization GetEqual, a grassroots organization—with a reputation for operating via nonviolent, direct action to instigate for LGBT civil rights. Compared to groups such as the Human Rights Campaign, GetEqual is lesser known and has a much smaller infrastructure and donor base. But they were still invited to the reception.

In a statement, Gutierrez said she could not celebrate LGBT pride while the abuse, deportation, and detention of undocumented immigrants continued, including those in the LGBT community. She cited some 75 transgender detainees currently being abused and assaulted while in ICE custody. “The White House gets to make the decision whether it keeps us safe,” Gutiérrez said. “There is no pride in how LGBTQ and transgender immigrants are treated in this country.”

Instead of dismissing Gutierrez and branding her as a heckler, we need to understand why she felt it necessary to speak up. One need not shame her for giving voice to the treatment of queer and trans undocumented immigrants—or accuse her of supposedly attacking a president that’s trying to act an ally.

True allies listen and practice accountability, even when it isn’t easy. Allies need not tolerate routine mistreatment, let alone expect it from the people they’re working with. But an undocumented trans woman of color fighting for her community isn’t a matter of malicious behavior; it’s a plea for recognition and a call to action.

Obama, and anyone else praising his stunning rebuke of her protest, would do well do take heed.