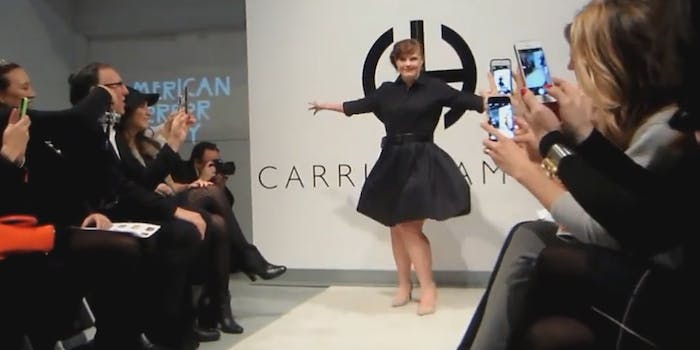 Jamie Brewer is inspirational because of her accomplishments—not her disability.

Actress Jamie Brewer, probably best known for her work on American Horror Story, walked the runway for designer Carrie Hammer at New York Fashion Week on Thursday. The attractive brunette doesn’t have extensive modeling experience and reported that one of the most difficult things about preparing for her appearance involved mastering the heels classically worn by runway models. But struggles with high heels—the bugbear of many who’ve stuck their feet into a pair of Manolos—aren’t why she’s attracting attention on the Internet.

Brewer also happens to have Down syndrome, a developmental disability characterized by having an additional copy of her 21st chromosome. This genetic disorder can manifest in a variety of ways depending on how much genetic material is replicated, as in many cases, it’s a partial copy, rather than a full one. Brewer is among a growing number of women with Down syndrome appearing on television and in print advertising, and, sadly, people are celebrating their presence for the wrong reason; most of the Twitter chatter around her appearance is calling her “inspirational” because of her disability, and for no other reason.

What makes Brewer inspiring is this: Becoming a celebrated actress in Hollywood is extremely difficult. Thousands of young women flock to Los Angeles every year in the hopes of getting their big break, and many of them spend years in acting classes, college and university training, and more to develop and refine their talents. Most of them fail to get more than bit roles; body of the week on CSI is the best they can hope for. Brewer managed to beat those odds, which is astonishing.

She also managed to beat the even more dismal odds for models, in this case in part because of her disability. Hammer’s “Role models not runway models” campaign—which previously featured wheelchair user Dr. Danielle Sheypuck and Karen Crespo, a quadruple amputee—is working to change the face of the fashion industry by including a wider diversity of bodies on the catwalk. But even those in Hammer’s campaign got there by aggressively competing for the limited number of slots available, and they also need to meet certain standards and expectations. Brewer meets those standards and she got there through hard work to raise her public profile and make people aware of her talent.

What does not make her inspiring is the fact that she happens to be disabled.

What does not make her inspiring is the fact that she happens to be disabled. However, Brewer is being treated as an inspirational and aspirational figure for every nondisabled person to admire and gawk at, a classic problem criticized by disability activists like the late and sorely missed Stella J. Young as “inspiration porn.” The trend fetishizes disability over actual accomplishments, treating people as exceptional because they happened to be disabled while doing something. For a classic example, think of that adorable animal video you probably liked or shared this week, showing some fill in the blank disabled creature using a cart for mobility/making friends with another animal/bonding with its person paired with a saccharine caption.

Writing in 2012, Young described a somewhat surreal experience from childhood: “When I was 15, a member of my local community approached my parents and told them she wanted to nominate me for some kind of community achievement award. My parents said, ‘Thanks, but there’s one glaring problem with that…she hasn’t actually achieved anything out of the ordinary.’”

That might seem like a cold thing to say from loving parents, but they were right; she wasn’t doing anything particularly remarkable. She was living her life, just like professional actresses and models do—she wasn’t unique or special because she happened to be disabled while doing it.

The “I-word” comes up again and again in coverage of Brewer’s appearance. But commentators were missing the point. Brewer was breaking a boundary, flipping expectations, and forcing a conversation, and that’s important, but it’s not inspirational. Like other models with non-normative bodies, Brewer is the face of change in an industry that has previously accepted a very narrow range of women and physical appearances.

Brewer was breaking a boundary, flipping expectations, and forcing a conversation, and that’s important, but it’s not inspirational.

Hammer’s campaign was a frustrated personal response to a lack of diversity at fashion week, but she didn’t originally intend to make such a huge statement, as she told Today. What she failed to realize is how few people saw themselves represented on the runway—for disabled people, the use of models like Dr. Sheypuck and Brewer is a sign of social progress. Hearing those women called inspirational is another matter; are they inspirational for breaking boundaries, or just because they’re disabled? The goal is to make disability unexceptional on the runway, not to single it out for attention.

This is a woman committed to creating social change and ensuring that disabled people have a voice in government and society—her disability is an intimate part of her identity and advocacy work, but it’s important to avoid labeling her professional accomplishments as somehow special because she’s disabled when she worked hard for them just like others in those fields.

I feel strongly about this because I’ve been called words like ‘brave,’ and ‘inspiring’ before. I was called ‘brave’ by a woman merely for going on my school’s foreign exchange trip, and I was called ‘inspiring’ by a journalist just for being deaf and working in the media. On one level, I was aware that there was no malice intended, they were simply trying to pay me a compliment, and they thought these were appropriate terms to us, so I responded as such. But on another, hidden level, I felt deeply patronized. Those words revealed low expectations—as though, simply because I’m deaf, I wasn’t expected to achieve anything. As if anything I did do became noteworthy as a result.

Individuals like those featured in the ads—like Amy Purdy, a Paralympic snowboarder—were viewed as inspirational by audiences, but not for the reasons they should have been. Becoming an Olympic-level athlete requires training, dedication, and the development of incredible athletic skills, which is incredibly inspiring. Happening to be disabled has nothing to do with it, and acting like Purdy is miraculous for her accomplishments demeans her hard work.

At BuzzFeed, LiaSeth commented on the Superbowl ads as well, discussing a key distinction that many viewers missed in their haste to describe someone as “inspirational” merely on the basis of being disabled while doing something:

Microsoft had a second Super Bowl spot; this one featured a woman named Estella Pyfrom, who cashed out her retirement savings and used the money to bring computers to children in underserved areas. Now this is a woman with an inspiring story. She did something extraordinary, something not everyone would choose to do. However, Microsoft’s press release on the commercials referred to both Pyfrom and Braylon [a boy who uses prostheses for mobility] as ‘heroic and inspiring individuals.’ Is there really a comparison here? One is a woman who gave up her life savings to help others, the other is a young boy who was born without legs. One made a choice to be a hero for those in need, the other chose nothing—his life is not like others, but that does not make him a hero, nor does it make him ‘inspiring.’

Women like Brewer and Purdy are inspirational not because of their identities, but because of what they do—how hard they’ve worked and what they’ve chosen to sacrifice to get where they are. The media seems to have missed that point, focusing instead on their disabilities instead of their work, which is a crying shame, because Brewer’s acting is incredible and she’s definitely a young actress to watch, while Purdy’s athleticism is remarkable.