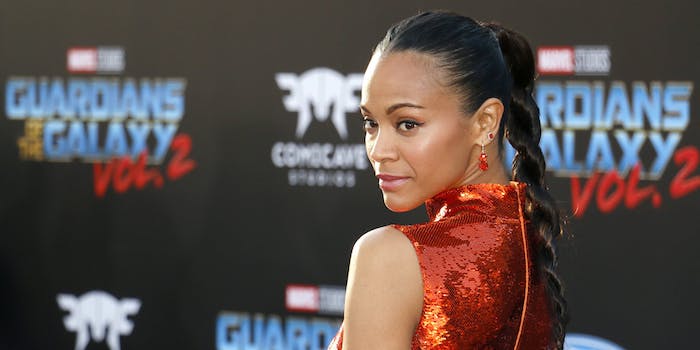 People have been sharing a fake nude photo of the actress on Instagram.

People have been sharing a fake nude photo of Zoe Saldana on Instagram, and she is not having it.

The 41-year-old actress responded Saturday to the fake nude of her that’s been making the rounds. In a now-deleted Instagram post, she slammed the people sharing the image and threatened to report their accounts. “Whoever the f—k you are, stop posting this false picture of me,” she wrote.

Saldana went on to say that she doesn’t even have NSFW photos of herself.

“This is not a real picture for anyone reading this. This is violating, offensive, and insulting for women,” she wrote in the post.

Directly addressing the accounts that have shared the image, Saldana said she is not a victim and will not hesitate to stand up for herself.

“I will report you immediately, let it be known I am no victim and I do not suffer in silence. I defend myself and defend all women that cannot speak for themselves,” she wrote. “You will not hide like a coward on this platform and think you can get away with it.”

Saldana’s Instagram post was likely deleted due to the explicit nature of the images, which she shared along with her response. Several users managed to get screenshots of the post, however, and have reposted it to their own social media pages.

With the rise of deepfakes and other similar technologies, posts like this will likely become more frequent. Luckily, any other woman—or man—who finds themselves in a similar situation will know that Saldana has their back.