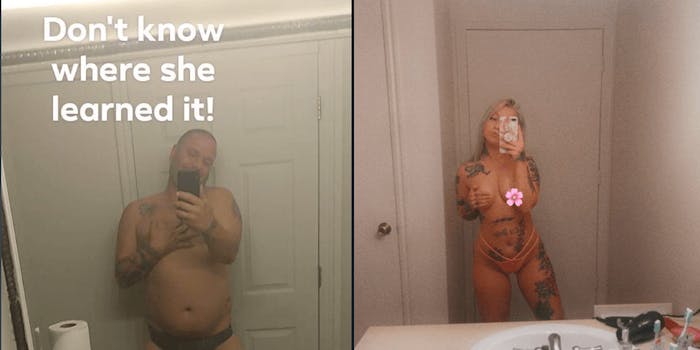 This takes 'dad jokes' to a whole new level.

A father recreated his daughter’s NSFW photo, and it’s the father-daughter meme we didn’t know we needed.

Tara Reilly, 19, posted semi-nude photos of herself on her Twitter page on Wednesday. Reilly said one of her family members snitched about the nude to her father. But he didn’t respond how you might expect. He father recreated his daughter’s nude with the caption “Don’t know where she learned it.”

“One of my family members tried to snitch to my dad about my explicit pictures,” Reilly tweeted along with her photo and her dad’s recreation.

Reilly told the Daily Dot that she has gotten closer with her dad over the years. (Something that, at least one person pointed out, rapper T.I.’s daughter can’t relate to.)

Reilly’s father apparently takes a more open approach to his daughter’s exploration of her sexuality.

“Body image is a huge part of my life I was never confident,” Reilly said. “I’m just a big believer that everyone should have an option to do whatever they want in life without judgement.”

Twitter is loving the fatherly support, and the viral post is spurring discussions about body image and confidence.

WE LOVE THIS TYPE OF SUPPORT

“if u wanna show off ur body, GO FOR IT. if u wanna keep ur clothes on, GO FOR IT. but what we’re not gonna do is shame people for whatever they choose to do with their body because … IT’S THEIR BODY,” @plurbabyyyy tweeted.

“maybe i wanna show off my body cause it took me so long to be comfortable with it ??? and maybe that’s okay ?? and it literally doesn’t matter ??” @nutashuhh tweeted.

maybe i wanna show off my body cause it took me so long to be comfortable with it ??? and maybe that’s okay ?? and it literally doesn’t matter ??

There are trolls hanging out in Reilly’s replies, too. But she says their negative comments don’t bother her.

“I know who I am and i just ignore the hate,” Reilly says. “Even bad press is still press.”