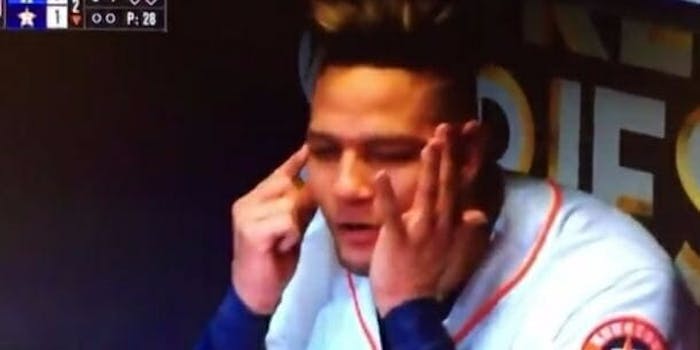 Will he be punished?

In the midst of what has been a fun, competitive World Series, Houston Astros first baseman Yuli Gurriel has inserted controversy, appearing to mock Dodgers pitcher Yu Darvish’s Japanese heritage after hitting a home run against him on Friday night.

Gurriel was seated in the dugout when he appeared to make a “slant eyes” gesture. It was caught on video by Fox and then instantly went viral online. Gurriel also reportedly said the word “chinito,” which translates into something like “little Chinese boy.”

“I didn’t mean to do anything offensive." –#Gurriel. Yes, because we all know that doing this to an Asian is a universal sign of respect. pic.twitter.com/tfFO9ebyQU

After the game, Gurriel—who actually played professionally in Japan in 2014—apologized.

“I did not mean it to be offensive at any point,” Gurriel said, via ESPN. “Quite the opposite. I have always had a lot of respect [for Japanese people]. … I’ve never had anything against Darvish. For me, he’s always been one of the best pitchers. I never had any luck against him. If I offended him, I apologize. It was not my intention.”

Darvish called the gesture “disrespectful,” but he also said he wasn’t angry with Gurriel. Later, Darvish tweeted this.

MLB commissioner Rob Manfred was scheduled to speak with Gurriel on Saturday.

Update 3:55pm CT: Gurriel has been suspended for five games of the 2018 season. That means he won’t miss any of the rest of the World Series.

The Astros have released the following statement: pic.twitter.com/BKo6b1CLV7