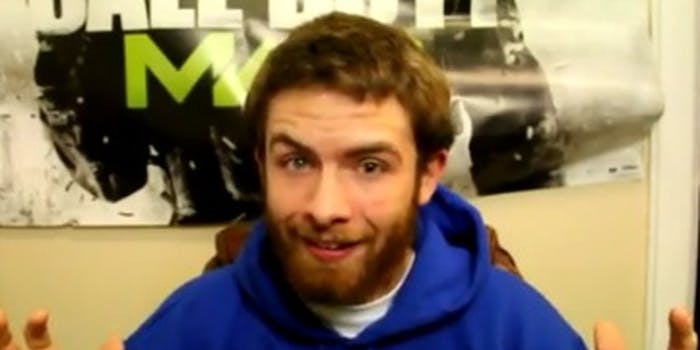 Once he was lost. Now he's a YouTube star; whiteboy7thst hit the 1 million mark.

One year ago, YouTuber whiteboy7thst, known for his video game commentary videos, celebrated reaching 100,000 subscribers. Last week, he hit one million, the badge of success among YouTubers.

Like almost every other YouTuber to reach this milestone before him, whiteboy7thst, 21, uploaded a celebratory video last week upon learning the news. The Daily Dot has compared these videos with those of  actors accepting Oscars for the first time, and whiteboy7thst’s video, titled “1 MILLION SUBSCRIBERS!”  was on par for the course.

He even tears up a little at one point, before telling himself and his viewers that he isn’t going to cry, having already cried that morning when his girlfriend woke him up with the news.

“Hello ladies and gentlemen,” begins whiteboy7thst with the phrase he uses to open most of his videos. “I have something amazing to announce… we are now part of the 69 channels,” he giggles for a second, “to have over one million subscribers.”

whiteboy7thst goes on to thank all his fans. “Without you, none of this is possible,” he says. “I love each and everyone of you. … I am lucky to be here.”

In his almost 10 minute video, whiteboy7thst admits that before his career on YouTube, “I didn’t really have the brightest future.”  Now, whiteboy7thst gets paid to play video games, and do wacky skits, pranks, and vlogs. There are hundreds of video game commentators on YouTube, and critics have credited whiteboy7thst’s ascent to his give-aways, and to his collaboration videos.

“I was an 18-year-old stoner, from the ghetto,” he says, before adding he was incredibly depressed, and didn’t have any goals, ambitions, or reasons to get out of bed.

“Both of my parents died; both my grandmas died… but you know, I started making videos, and it led me somewhere.”

He goes on to say how important being able to talk to someone—his audience—has been for him, and how thankful he is for being able to have a beard. (If he had a traditional job, he says, he’d probably have to shave his beard, and wouldn’t have “the freedom” to do “whatever” he wanted, which includes “dolphin diving into a pool of pudding.”)

Like almost everything whiteboy7thst does, there is some controversy around this video as well; According to YouTube, he has one million subscribers (subs in YouTube jargon), but on VidStatsX, a trusted YouTube statistics site, he has only 978,000 — a fact he mentions in his vlog as well. (This could be due to YouTube’s recent initiative removing inactive accounts.)

Besides some trolling comments, or comments addressing this subscriber discrepancy, whiteboy7thst’s fans seem genuinely happy for him.

“I hope﻿ you make millions of youtube money :)” commented adocfuly.