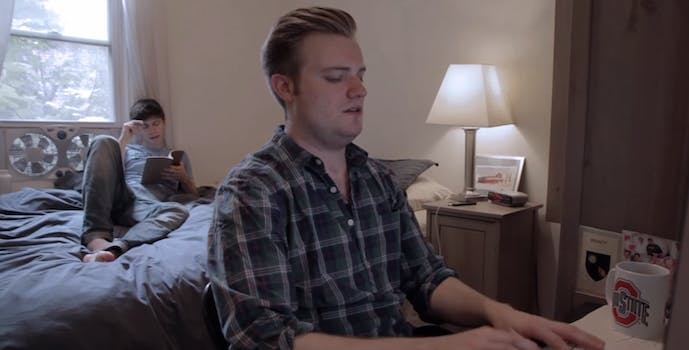 Yo, dawg, I heard you liked webseries.

Meet your new favorite webseries: a webseries about a webseries. While roommates everywhere are dreaming up the next hit webseries, Ian Stroud and his real-life roommates Matt Starr and Brady O’Callahan may have stumbled upon the greatest premise of all: Roommates Making a Web Series About Living in New York City: The Web Series.

Series writer and creator Stroud holds our own navel-gazing tendencies—specifically our ever-growing belief that our daily lives are excellent fodder for a watchable entertainment—right up to our noses, and the results are hilarious.

Episode 1 introduces us to Brady and Matt as they have an ordinary exchange in the kitchen of their New York City apartment. After some minor quibbling, Matt and Brady simultaneously reach an epiphany: The basic minor conflicts of living together are gold, and they simply have to create a webseries.

Stroud’s story and camera work expertly contrast the natural candor of daily human interaction with the absurd posturing of amateur creatives. When we revisit the scene, as reimagined by the roommates, they are cartoonish versions of themselves. Eager to demonstrate the brilliance of a ho-hum idea, Matt and Brady trip over themselves at each turn, belaboring the importance of every action and resting for comically long pauses on the most minor of details.

The highlight of the series, however, may be the pitch-meetings between Brady and Matt. Upright Citizens Brigade Theatre performer O’Callahan’s gleeful reactions to his own pitches are priceless. He can barely contain his delight and giggles incessantly at his own simple ideas such as, “Maybe one of the roommates is, like, making too much noise late at night, but we find out he’s making birdhouses?… Where would he… Like, I barely see birds!”

Starr, who has perfected the art of deadpan delivery as a UCB1 Comedy Reporter, is the perfect foil. While Brady thrills at the genius of their ordinary creation, Matt takes the task as seriously as an oil tycoon negotiating a billion-dollar deal.

This humble little gem is chock-full of meta-jokes sure to delight fans of Portlandia or The Larry Sanders Show. The slyest joke of all, acknowledged in the first scene of episode 2, may be that thus far Stroud has only made two episodes, spaced over a year apart. Hopefully, there are more to come. If so, Stroud and his team may be poised to win the Internet.