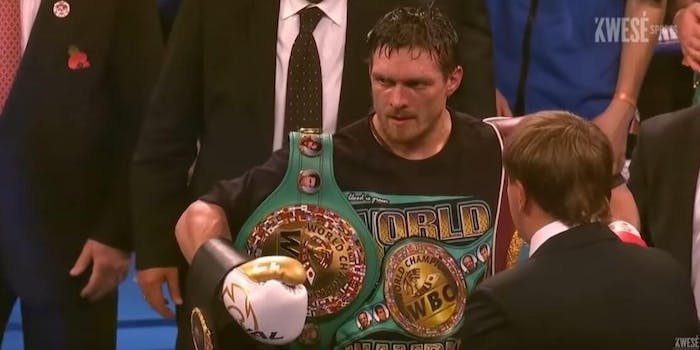 How to stream Usyk vs. Witherspoon

Oleksandr Usyk hasn’t even stepped into the ring for his first fight as a heavyweight, and already, he’s faced plenty of adversity. The former undisputed cruiserweight champion’s original move to heavyweight vs. Carlos Takam was canceled five months ago after Usyk suffered a biceps injury. Then, this week, his opponent for Saturday’s fight on the DAZN live stream, Tyrone Spong, was removed from the card after failing a drug test.

Now, the undefeated Usyk has a new opponent in Chazz Witherspoon, and he’s ready to start on his journey in the heavyweight division, where he could become an even bigger star and make even more money.

Witherspoon probably won’t give him much of a test—he’s certainly not as potentially scary as Takam would have been—but Usyk is one of the best pound-for-pound fighters in the world and is always worth watching.

Here’s everything you need to know to watch Usyk vs. Witherspoon.

The only legal way to watch Usyk vs. Witherspoon in the U.S. is on DAZN. Since September 2018, the streaming service has put on some of the most important fights in boxing. Though Canelo Alvarez, boxing’s biggest star, played tug-of-war with the service in finding his next opponent, Sergey Kovalev, and though it caused a potential rift between him and his promoter, DAZN is all in with him—and for good reason. DAZN also showcased Andy Ruiz upsetting Anthony Joshua for the heavyweight championship (the rematch will air in December), and it’s featured two Gennadiy Golovkin fights in the past four months. And don’t forget about November’s Logan Paul vs. KSI rematch.

DAZN costs $19.99 per month or $99.99 for the entire year, but for fight fans, it’s been well worth it. It streams more than 100 fight cards per year—that includes a number of MMA cards with Bellator—and you can watch some of the best boxers in the world (Alvarez, Joshua, and Golovkin) and some of the potential rising stars (Devin Haney, Regis Prograis, and Vergil Ortiz Jr). DAZN says it’s doing its best to try to kill the longtime boxing PPV model, but another perk of a subscription is getting to watch fighters like Usyk on a regular basis that should get your blood pounding as the fists begin flying.

DAZN works with Roku, Apple TV, Amazon Fire Stick and Fire TV, Xbox One, PlayStation 4, and both iOS and Android phones. All you have to do is download the DAZN app and log-in with your subscription credentials. You can also stream via computer browsers Chrome, Firefox, Safari, Edge, Internet Explorer, and Opera. (Read our full DAZN review here.)

Usyk vs. Witherspoon: Why it matters

For the first time in 14 years, all four cruiserweight titles were unified in July 2018 when Usyk (16-0, 12 knockouts) dominated Murat Gassiev in the finals of that year’s World Boxing Super Series tournament. To say Usyk was stellar during his three matches in that WBSS event is to undersell it.

Then, he defended his undisputed championship against Tony Bellew and knocked him out in the eighth round to send the solid Bellew into retirement.

But now, Usyk wants heavyweight recognition. It’ll be an interesting ride, because the 6-foot-3 Usyk will certainly be undersized in this era of the heavyweight division. Deontay Wilder, one of the titlists, is 6-7 and is one of the hardest punchers in heavyweight history. Tyson Fury stands at 6-9, and in the past four fights, he’s been in the 255- to 265-pound weight range. Former unified belt-holder Anthony Joshua is 6-6, and the man who beat him, Andy Ruiz, weighed 268 pounds when he upset Joshua (remember, Usyk weighed 198 pounds for his last bout 11 months ago).

“There have been no problems in order to move to the heavyweight division,” Usyk said, via Matchroom Boxing. “At least to me there have been no problems. I simply moved to the heavyweight division, and that was it. Virtually nothing has changed in my training. We’ve simply started doing even more work. Different and hard work, which is practicing with big guys who pose a great threat.”

“We’re working hard, smiling, going crazy during the training camp, and doing our job,” he added. “Everyone who is in my camp does their job 100%, meaning that they give everything so that I feel comfortable. Everything is as comfortable as possible; the food, rehab, resting, massage, training. My team is looking after all of it and we are working hard together.”

Witherspoon (38-3, 29 KOs) is a solid last-minute replacement choice. He’s won his last eight fights—and hasn’t lost since 2012—but he hasn’t faced a recognizable opponent in more than a half-decade. Even when he was fighting solid competition, he was usually losing, falling to the likes of Chris Arreola and Tony Thompson. For those reasons, Witherspoon is a +1450 underdog, meaning you’d win $1,450 with a $100 wager.

But the 38-year-old is ready for his biggest test in many years.

“I have been in training ready for a big fight, and it doesn’t get bigger than this. Oleksandr is stepping up to heavyweight, and he’s going to find out that it’s a totally different game,” Witherspoon said in a statement. “I’ve won my last eight fights and I really feel that I’ve been waiting in the wings for a huge opportunity like this and I am going to put every ounce of myself into the fight on this massive stage.”