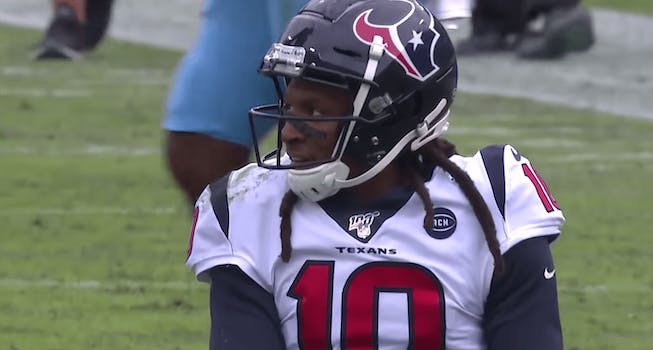 Saturday NFL Football: How to stream Texans vs. Buccaneers

It's a shootout in the South as the Texans head to Florida to face the Bucs.

In what has become an annual tradition, the NFL has once again moved select December games to Saturday to airing exclusively on NFL Network, in hopes of luring new subscribers for next year. This year, that includes what could be an offensive bonanza as the Houston Texans travel to Florida to take on the Tampa Bay Buccaneers.

At first glance, this game doesn’t feel particularly consequential. However, the 7-7 Bucs have proven their ability to put up points. (Just ask the Rams, who saw the Bucs light them up for 55 points in Week 4.) The Texans have shown that despite their solid record, they can be scored on. If Jameis Winston can minimize his turnovers—a big if—it’s conceivable that the Texans could find itself in a showdown for the AFC South title when they face the Titans in Week 17.

Though the Bucs are eliminated from playoff contention, the final games of the season matter for them, too. Bruce Arians has coached the team to a .500 record despite Winston’s record-setting number of turnovers … so what do they do at quarterback in 2020?

The Bucs have won games thanks to Winston’s ability to put up massive amounts of yardage. The last two weeks, he’s thrown  for an insane 458 and 456 yards. But the Bucs brass has to decide if Winston can take this team to the promised land despite his turnover issue. The other option might be to go with a safer, if less statistically impressive, replacement next year?

Winston will have to prove himself in Week 16 without the help of his two best receivers. Chris Godwin and Mike Evans will watch the game from the sidelines. The Texans can breathe a small sigh of relief knowing they won’t be facing the Bucs at full strength, but Winston will still have targets, notably Breshad Perriman, to either find or spectacularly miss.

If you have the NFL Network, you might be in for a fun, gun-slinging matchup on Saturday afternoon.

Here’s everything you need to know to live stream Texans vs. Buccaneers, including what to watch for on the field.

How to watch Texans vs. Buccaneers online

While most Thursday night games are simulcast on Fox, Amazon and NFL Network, these special Saturday games are only available on the NFL Network. If you want to take the plunge, here’s how to spend your Saturday vegging out on your couch watching football in a glassy-eyed state of reverie.

Texans vs. Buccaneers stream: What to watch for

This should be a shootout. If the Bucs receivers were at full strength, we would say this is exactly the kind of game that Tampa Bay can win. Unfortunately, the Bucs are down two great receivers in Chris Godwin and Mike Evans, while Houston has its stellar receiving corps intact.

Even with the injuries, this game could be closer than it looks. While Winston may gift the Texans a few picks, Tampa Bay has a much better defense than Houston. Though they often give up a ton of points thanks to Winston’s poor ball control and the high-scoring nature of their gameplay, the Bucs are 9th in Defensive DVOA. With the loss of Jadeveon Clowney to Seattle and J.J. Watt to injury, defense has been a problem for the Texans all year. Houston has sunk to 27th in Defensive DVOA.

Houston certainly has the edge in offensive DVOA (11th vs. the Bucs’ 21st), and that gulf might be widened by Tampa Bay injuries. If Perriman can have the kind of game he had last week (5 receptions for 113 yards and 3 TDs), then the Bucs might stay competitive.

Another challenge for the Bucs is that the Texans have finally figured out their running game. Carlos Hyde has quietly run his way to becoming the 10th-best rusher on the season.

You have to give the Texans the edge here. They have one of the strongest receiving combos in the league and they are healthy. Beyond that, they have more to play for. They’re going into this game defending their playoff spot while the Bucs are playing to keep their jobs on next year’s squad.