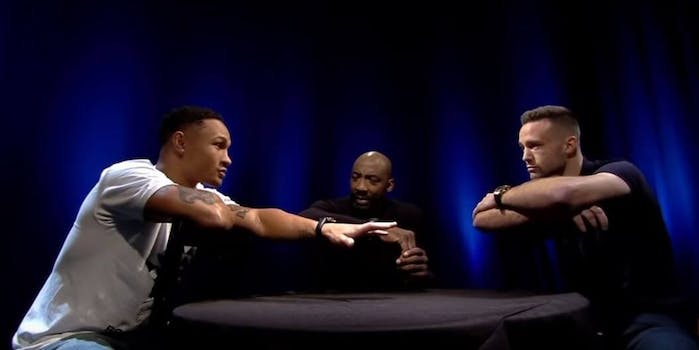 How to stream Regis Prograis vs. Josh Taylor

Two years after Terence Crawford unified all four 140-pound junior welterweight titles before abandoning the weight division for the riches at 147 pounds, Regis Prograis and Josh Taylor will unify two of the belts on Saturday in a fight you can live stream on DAZN. The hope for the two boxers is that they themselves can eventually unify all four straps and, like Crawford before them, call themselves the undisputed champion. But until then, Prograis and Taylor are content to fight each other and grab the moniker of best junior welterweight in the world.

“He’s the best fighter in the world at 140 pounds besides myself,” Prograis told the Daily Dot. “I can’t put anybody in front of him [in the rankings] besides me. That’s why this fight is so intriguing. You just don’t get this in boxing. You get world champions fighting, but you don’t get No. 1 and No. 2, undefeated boxers in their prime, like this. I give him total respect. But I don’t see how he can possibly beat me.”

Taylor, of course, disagrees—and what happens on Saturday night in what has become one of the most anticipated showdowns of the year will be fascinating.

Here’s everything you need to know to watch Prograis vs. Taylor.

The only legal way to watch Prograis vs. Taylor in the U.S. is on DAZN. Since September 2018, the streaming service has shown some of the most important fights in boxing. Though Canelo Alvarez, boxing’s biggest star, played tug-of-war with the service in finding his next opponent, Sergey Kovalev, DAZN is all in with him—and for good reason. DAZN also showcased Andy Ruiz upsetting Anthony Joshua for the heavyweight championship (the rematch will air in December), and it’s featured two Gennadiy Golovkin fights in the past four months. And don’t forget about November’s Logan Paul vs. KSI rematch.

DAZN costs $19.99 per month or $99.99 for the entire year, but for fight fans, it’s been a great value. It streams more than 100 fight cards per year—that includes a number of MMA cards with Bellator—and you can watch some of the best boxers in the world (Alvarez, Joshua, and Golovkin) and some of the potential rising stars (Devin Haney and Vergil Ortiz Jr). DAZN says it’s doing its best to try to kill the longtime boxing PPV model, but another perk of a subscription is getting to watch fighters like Prograis and Taylor from non-U.S. locations on a regular basis that should get your blood pounding as the fists begin flying.

Prograis vs. Taylor: Why it matters

When the two enter the ring for the finals of the World Boxing Super Series junior welterweight tournament on Saturday, there’s no doubt that the 5-foot-10 Taylor will have physical advantages against Prograis, who is 5-8 and whose reach is about two inches shorter than Taylor’s. But it’s more than his height and length, according to Taylor. Taylor (15-0, 12 knockouts) just thinks he’s better overall than Prograis (24-0, 20 KOs).

“I think I’m bigger than him, stronger than him and quicker than him. I punch just as hard as him. So I think I can beat him in every department,” Taylor said, via the BBC. “ … If he tries to walk me down, I’ll walk him into a shot and get him out of there. If not I can outbox him for the full 12 rounds. So I’m fully confident I can win this fight either way it goes.”

While the oddsmakers have made Taylor a +130 underdog, meaning you’d win a $130 payday with a $100 wager (Prograis, meanwhile, is a -160  favorite), Taylor makes a compelling case. He’s had three straight impressive performances, beating former titlist Viktor Postol, stopping the then-undefeated Ryan Martin, and handily beating the then-undefeated Ivan Baranchyk. In his last six fights, the combined records of his opponent is 154-9. And Taylor continues to win in impressive fashion.

“I’m better all around,” Taylor told RingTV.com. “I’ve had less (professional) fights than he has, but I’ve got more experience overall and I’ve faced better opposition. I’ve boxed at a higher level internationally in the amateurs and had tests as a professional. I just feel there’s no way he can beat me.”

Prograis has made his own impressive rise to the top of the division. He blasted through and devastated former unified titlist Julius Indongo in 2018, and he thoroughly outboxed former titlist Terry Flanagan 12 months ago. Those standout performances are what led Prograis to the conclusion that Taylor’s boasts of his physical advantages don’t mean much.

“He’s got to convince himself,” Prograis said. “The tale of the tape never matters. Of course, he is taller than me, he is longer than me. Does he punch harder than me? Is he as quick as me? I don’t think so. Does he have my athletic ability, my talents? I just can’t see it.”