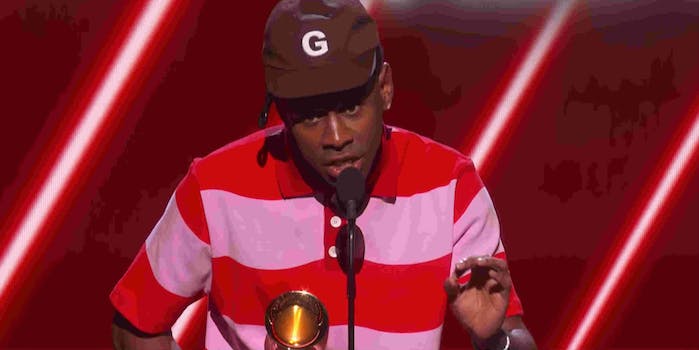 The artist is among many who blasted The Recording Academy for racist snubs.

Tyler the Creator received an award for best rap album at the Grammy Awards on Sunday night but expressed torn feelings about his win.

“On one side, I’m very grateful that what I make can just be acknowledged in the world like this, but also it sucks that whenever we—and I mean guys that look like me—do anything that’s genre-bending… They always put it in a rapper/urban category,” he said in an interview after the show.

His response got even more heated when he argued the word “urban” is highly problematic.

“I don’t like that urban word, it’s just a politically correct way to say the N-word,” he added. “Half of me feels like the rap album nomination is like a backhanded compliment.”

Tyler, The Creator calls out the #Grammys on their racism when it comes to music genres pic.twitter.com/rzWe2lR3xO

Rapper Sean “Diddy” Combs also called out the award show for its mistreatment of Black artists during his “Salute to Industry Icons” acceptance speech.

Black musicians aren’t the only ones vocal about the Grammy’s race problem. When the award show’s nominations were first announced, many BTS fans were outraged that the Korean pop group didn’t receive a single mention despite its worldwide success.

Someone tell me how bts, didnt get any Grammy nominations…like map of the soul persona sold over 4 million copies, A MINI album , had the most views for their music video, hard more impact that a majority of artists this year.. #GRAMMYs

Tyler’s criticism comes amid The Recording Academy’s launching of diversity initiatives to help “ensure that the Academy—and the music business—is truly representative of artists and their audiences.”

“Too often, our industry and Academy have alienated some of our own artists — in particular, through a lack of diversity that, in many cases, results in a culture that leans towards exclusion rather than inclusion,” said Harvey Mason Jr., chairman and interim CEO of The Recording Academy, in a message to members.

Per recommendations made by its diversity task force, The Recording Academy has pledged to hire a diversity officer, establish a fund to distribute to organizations for women in the industry, and establish a fellowship to review the Academy’s diversity and inclusion efforts.