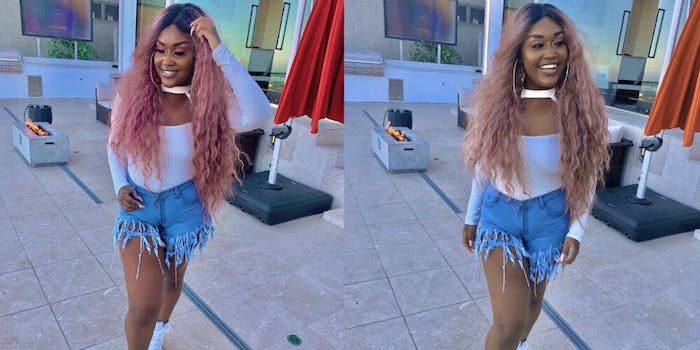 Jameela Jamil asked the rapper to take the social media post down.

Rapper CupcakKe, who is known for her YouTube hit “Deep Throat,” claims nothing but water has gone down her throat for a month.

After a month-long hiatus from all social media platforms, CupcakKe–whose real name is Elizabeth Harris–resurfaced with a noticeably different look that she stated is the result of a water fast.

“Water fast for past month & here’s my results,” she tweeted, along with two photos featuring her weight loss transformation.

Some fans shared their support and complimented her slimmer physique.

“THAT OUTFIT.. THE HAIR.. THE LOOK IM IN LOVE,” Twitter user @twiisterariola wrote.

THAT OUTFIT.. THE HAIR.. THE LOOK IM IN LOVE

Many fans were shocked by what they dub is an “extreme” and “unhealthy” diet method.

“I see a lot of praise in the replies but is no one gonna question ‘water fast’…..like please tell me she had more than water for a MONTH,” Twitter user @httpmollz wrote. “I’m concerned.”

I love you and you’re gorgeous no matter your weight. Diets like this are dangerous, and as someone recovering from an ED thinness can become an addiction you do you ur grown but pls pls pls do not hurt yourself if needs be go get help before it spirals it’s never too early ♡

so you starved yourself but drank water? why are we cheering this???

Others urged her to be a better role model for her young, impressionable fans.

“Cupcakke, I love and support you… but please think twice before promoting this kind of thing on your twitter. A lot of young and impressionable people follow you and may try this without medical consultation, causing them to develop disordered eating,” Twitter user @VITRIOLUM, who is recovering from anorexia, wrote.

i know cupcakke deals w serious issues but the fact that she’s promoting a “water fast”? for a month? as a fat girl, this scares me so much because i can only think of younger big girls seeing this and thinking that it’s okay. it’s really not. this is how eating disorders start.

Actress and activist Jameela Jamil, who advocates for body positivity and consistently slams “toxic diet culture,” asked CupcakKe to take the post down.

“Most people reading this may not have the medical supervision or extensive knowledge needed to even TRY to attempt this safely. The dangers are immense, and it will harm your metabolism, so isn’t even an effective tool for weight loss. It’s just very unsafe,” Jamil tweeted.

Jamil then sent CupcakKe her “love and best wishes” in a follow-up tweet.

“We have way too much power and influence and we just need to try to be very careful with what we promote so that we don’t cause harm to the people who trust us,” she tweeted.

Over the past year, there have also been concerns over the Chicago-born star’s mental health.

On Jan. 8, 2019, CupcakKe was reportedly taken to a hospital in Chicago after tweeting that she was going to die by suicide. In a tweet posted the next day, CupcakKe wrote, “I’ve been fighting with depression for the longest. Sorry that I did it public last night but I’m ok. I went to the hospital & I’m finally getting the help that I need to get through, be happy, & deliver great music. Thanks for all the prayers but please don’t worry bout me.”

A similar incident occurred in September of 2019, when CupcakKe announced her retirement via Instagram Live, stating, “This live is going to be the last video that y’all [will] see of me.” She said that she would no longer be releasing music to the public and that she would be removing her music from all streaming platforms. In the same live stream, CupcakKe announced she would be canceling her The 10k Giveaway Tour, as she tearfully explained that she was “corrupting the youth” with her raunchy songs. She said she was disturbed to see children in videos and young people at her shows singing along to her explicit songs and said, “I want to go to heaven after this. I don’t want to go to hell.”

I don’t know if my first tweet went through but someone who is able to contact her please do, some of the things cupcakke said during the live were very concerning. pic.twitter.com/haluSRuZas

Before taking a social media hiatus, she directed a tweet at fellow musician Camila Cabello, saying, “Yes sis …. I f*cked your man … & I did it on purpose since your racist ???? & that’s the TEA‼️ let’s tell the world become I grab the receipts.” She was referring to Cabello’s boyfriend Shawn Mendes, according to Paper.

CupcakKe is now back on social media, and her music is available on all streaming platforms.