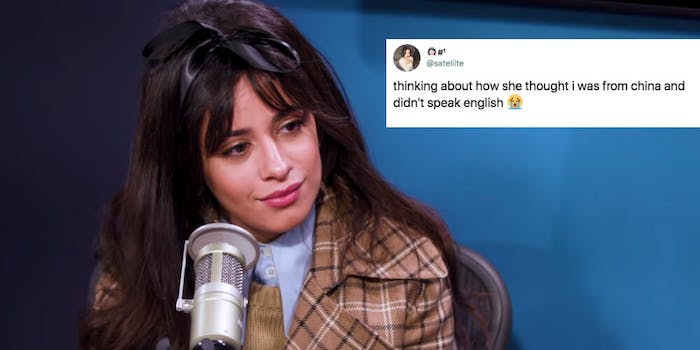 Cabello's racist, resurfaced Tumblr account prompted one fan to recall an interaction she had with the pop star.

On Wednesday, Camila Cabello apologized for an old, resurfaced Tumblr account of hers that was littered with racist and xenophobic posts. The controversy prompted one fan to recall an interaction she had with Cabello at a 2017 meet-and-greet.

“Thinking about how she thought I was from China and didn’t speak English,” Twitter user @sateIilte wrote, quote tweeting her 2017 meet-and-greet post, which contained a photo of her with the pop star.

After posting the tweet, sateIilte said Cabello stans were “harassing” her via DM, so she offered further clarification about what went down.

“I’m not lying?? I never tweeted about it that much bc I literally used to stan her basically I only spoke about this in dms/real life.. I don’t really have ss bc I never thought it was that big?” sateIilte tweeted, along with screenshots of a private group chat between what appears to be herself and friends, discussing the incident back in 2018.

In the conversation, sateIilte appears to be dumbfounded over Camila thinking she didn’t speak English.

“English ain’t my first language,” she sarcastically wrote, to which a friend responded, “Tea it’s Chinese.”

One of her friends also jokingly shared a photo of “Meg when Camila said China.”

SateIilte said she only recalled the interaction after Cabello’s Tumblr posts resurfaced. In one of the posts, Cabello reblogged a meme that read, “Why do Asians speak the ching chong language.”

While sateIilte stated that her tweet wasn’t “meant to be that deep” and “this stuff isn’t even close to what she did vs the black community,” Cabello fans are adamant on debunking the story.

“Sure..” one fan tweeted, along with a screenshot of an alleged thread by sateIilte from around the time of the meet and greet.

In one of the alleged tweets, she wrote that she was “starstruck” and exchanged stares with Cabello for a “long ass time.”

“She was on a vocal rest so she couldn’t speak very loudly, but she was so kind and gave such a great [meet-and-greet],” sateIilte allegedly wrote.

The fan also included a message exchange with one of sateIilte’s friends, in which the alleged friend claimed Cabello only thought there was a language barrier because sateIilte was “in so much shock that she couldn’t speak to Camila.”