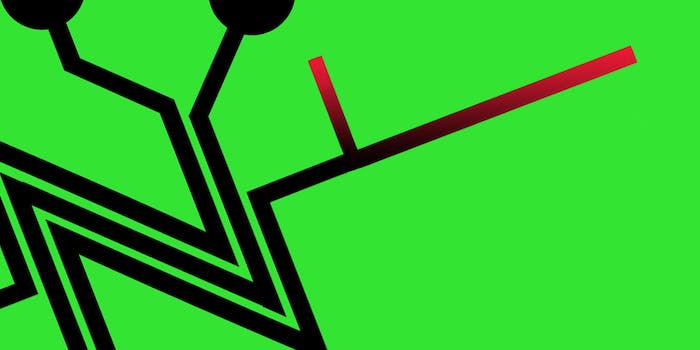 It's a clever plan, but will it work?

Verizon Wireless may try to circumvent the FCC‘s net neutrality rules with a new streaming-video service in what is sure to be the first of many attempts by telecom companies to exploit loopholes in the commission’s open-Internet regulations.

Investors’ Business Daily notes that Verizon could lure customers to its new service—which the company has discussed but has yet to officially unveil—by promising that data usage from the service wouldn’t count against monthly data plans.

If Verizon exempted its own streaming-video traffic from its plans’ data caps, it would effectively be prioritizing that traffic over, say, traffic from the HBO GO app. It wouldn’t be slowing down HBO GO or speeding up its own service, but it would be using one of its unique powers as a carrier—imposing data caps—to incentivize the adoption of its service over competitors.

The Daily Dot asked Verizon how it would treat its streaming service’s traffic, but the company declined to address the issue.

“I’m not going to comment on a product that hasn’t been announced,” Verizon spokeswoman Debra Lewis said in an email.

An FCC spokeswoman declined to comment on how the commission would respond to such a move by a wireless carrier.

Verizon is also considering offering its streaming-video service for free by relying on advertising instead of subscriptions. CFO Fran Shammo told Reuters in March that the company was exploring advertising as an alternative to “a consumer-pay model.”

Making a service free by relying on ads is one thing. Any streaming service can do that on any carrier. But Verizon is, for obvious reasons, the only company that can exempt an app’s data usage from Verizon’s data caps. Such an arrangement would raise serious competitive concerns.

Craig Moffett, an analyst at MoffettNathanson, told IBD that Verizon exempting its own streaming-video traffic “would be a very provocative move” that the FCC would be sure to carefully scrutinize.

T-Mobile raised similar concerns last June with its “Music Freedom” subscription plan, an extra package that would let customers listen to Pandora, Spotify, and other music apps without adding to their data usage.

By offering customers cap-free access to certain services, T-Mobile was giving those services—usually owned by large companies that could afford to pay T-Mobile for inclusion in “Music Freedom”—a leg up over the competition.

The FCC’s new rules are notable for applying certain net-neutrality principles to the mobile Web for the first time.