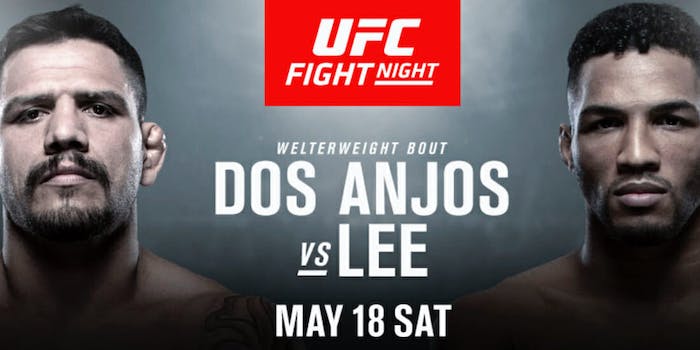 How to stream UFC Fight Night 152 for free

It's about to go down in Rochester.

UFC Fight Night 152 arrives in Upstate New York on Saturday with a doozy of a welterweight bout. Rafael dos Anjos will take on Kevin Lee in Rochester at the Blue Cross Arena in the main event, and both fighters are looking to bounce back from losses with a crucial win. For dos Anjos, defeating Lee will help solidify his current no. 3 ranking in the welterweight division while a victory for Lee will mark his first in the weight class (after jumping up from the lightweight weight class).

Rochester might be home to a regionally beloved dish called a garbage plate, but UFC Rochester’s fight line-up is anything but. And there’s an easy way for fans to access all of the night’s action. Here’s everything you need to know to live stream UFC Fight Night 152 for free.

Dos Anjos vs. Lee: How to watch UFC Fight Night Rochester for free

For UFC fans, there’s only one streaming service that will provide the mixed-martial arts coverage they crave: ESPN+. UFC aficionados who subscribe to ESPN+ gain an unparalleled resource to follow MMA and binge on other premium ESPN content.

What prompted the current arrangement? In May 2018, ESPN inked a $1.5 billion deal with UFC to carry 30 Fight Nights, with the company selecting 20 of those events to run on ESPN+, including Fight Night 152. ESPN and UFC then extended their partnership in January 2019 to make ESPN the home of all UFC pay-per-view events, which allows active ESPN+ users to purchase any PPV UFC event for $59.99 per event. UFC fans who don’t have an ESPN+ account but wish to subscribe can gain a year’s worth of the streaming service with one $79.99 PPV purchase. That’s a pretty sweet deal.

Dos Anjos vs. Lee: Why it matters

Talk about an introduction to being a welterweight. In Kevin Lee’s first fight in the weight class, he’ll take on UFC legend Rafael dos Anjos, who’s currently ranked no. 3. Although dos Anjos is also a relative newcomer to the division (he only started fighting as a welterweight in 2017), he touts a 3-2 record and still has a robust résumé as a lightweight, including a championship. Lee can quickly establish himself as a welterweight force to be reckoned with by taking out dos Anjos, as well as firmly put his loss to Al Iaquinta in December 2018—a unanimous decision—behind him.

Dos Anjos, meanwhile, is coming off two straight losses, the only two fights in which he competed in 2018. He probably won’t climb in the rankings by defeating Lee in his first fight in the division, but a victory will provide a nice shift in momentum. ESPN’s Richard Mann sees a lot of similarities between both dos Anjos and Lee, as he credits both fighters’ lightweight backgrounds; however, he does warn that dos Anjos has shown a noticeable weakness in preventing takedowns since moving up a weight class. Mann notes that Lee could get a leg up in the match-up if he’s able to tap into his wrestling background to expose dos Anjos.

To his credit, Lee knows that the fight is going to be bruising. He told BJPENN.com “I see it being a bloodbath, I really do. I haven’t gotten one of them in the UFC yet.” The stakes couldn’t be higher.

*—Derrick Krantz replaces Neil Magny. Magny pulled out of the bout because of a potential USADA violation.