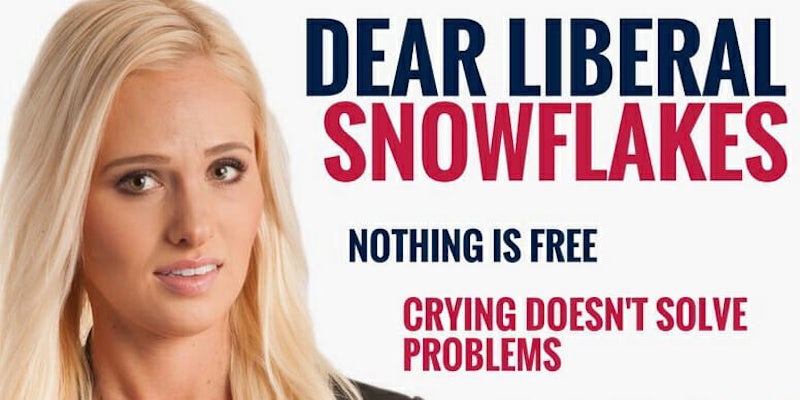 'Not everyone is a winner.'

In between conservative political punditry and planning her Halloween costumes, Tomi Lahren is a spokesperson for Turning Point USA, a conservative nonprofit geared toward students.

Apparently, in anticipation of an upcoming summit at which Lahren will speak, the organization launched an ad Monday featuring an uncomfortable-looking Lahren alongside some text.

“Dear liberal snowflakes,” the ad says. “Nothing is free; crying doesn’t solve problems; screaming doesn’t make you right; not everyone is a winner; there are no ‘safe spaces.’”

Twitter, of course, immediately turned the ad (which is ripe for quick Photoshop doctoring) into a meme, blasting Lahren for the hypocrisies within the statements.

For one thing, conservatives totally lost their shit over coffeemakers this weekend when Keurig pulled ads from Sean Hannity’s show after he defended alleged sexual predator Roy Moore. So who’s really the crybaby here?

you're not totally wrong pic.twitter.com/CCkfAsGq8Q

All of this is almost as funny as that time Lahren posed for selfie—only to be completely denigrated.