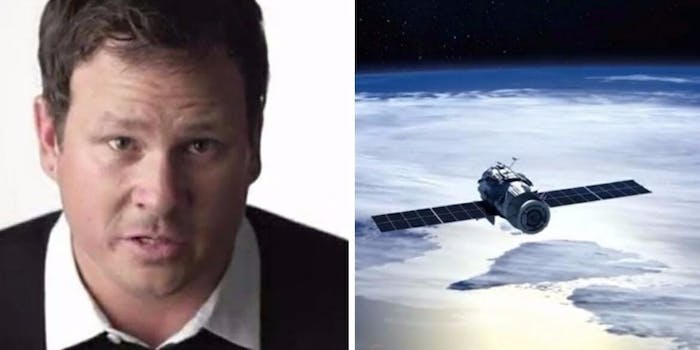 Screengrab via To The Stars/YouTube

You won't believe how much money he's raised.

Tom DeLonge is the former frontman for Blink 182, and he’s also an award-winning UFO researcher, claiming he’s had alien contact while trying to better this world’s understanding of otherworldly beings that might exist.

Now, DeLonge is taking it a step further.

In a recent Facebook post, DeLong wrote: “Hello, my name is Tom DeLonge from the Blink-182. I have brought together an elite team from CIA, DOD and the FMR Director of Advanced Programs at Lockheed Martin’s SkunkWorks. We are aiming to build this ElectroMagnetic Vehicle to Travel instantaneously through Space, Air and Water by engineering the fabric of Space-Time. Our company is called To The Stars… and you can INVEST in our plan to revolutionize the world with technology that can change life as we know it.”

According to To The Stars Academy of Arts and Science, it’s raised more than $364,000 from 769 investors (as of this writing). Who are these investors? As NME points out, it’s “a former deputy assistant Secretary of Defense for Intelligence; a former senior intelligence officer at the CIA; a former advanced systems director for aeronautical company Skunk Works; a former director of programs to investigate unidentified aerial threats; a group of ‘distinguished physicists’; a geneticist; a molecular biologist; and an ‘award-winning storyteller.’”

In part, DeLonge has started this company—which combines aerospace engineering, science, and cinematic entertainment—because he wants to let the world in on some extraterrestrial secrets.

To The Stars Academy plans to be launching an Unscripted (reality) Television Series. On it, we aim to bring you in on our weekly progress building an Aerospace and Entertainment Co. We will invite you behind the scenes as we bring out (for the first time in history) US Gov Declassified Videos of UFOs, and Documents that have never-before been seen by the world. Videos captured on the most advanced Military technology in the world. Physical evidence that everyone has been waiting for. Exciting things ahead. Networks can contact APA Agency for all inquiries. Www.ToTheStarsAcademy.com

There’s more to it than searching for UFOs, though.

“[It’s] a collaboration with global citizens to explore the outer edges of conventional thinking, targeting the mysteries of the universe, and using them to help unify mankind,” DeLonge said in the video below.

We don’t know specifically the goals of DeLonge’s new venture or the timeline for reaching said goals. But if the video tells us anything, it seems clear that DeLonge won’t be returning to his pop-punk musical roots any time soon.