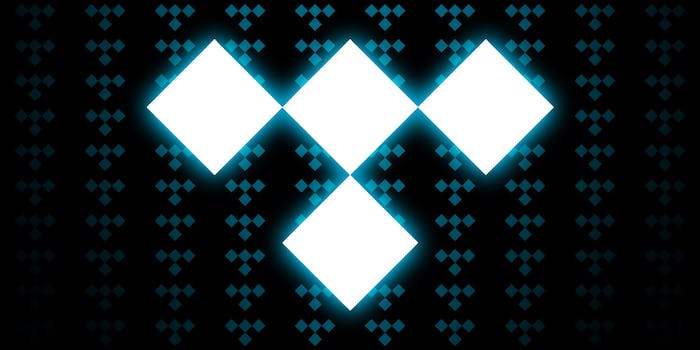 The half-life of a Tidal exclusive

Not even Beyoncé could change things.

On April 23 it seemed like everyone on the Internet collectively stopped to gather in front of their TVs (or turn on HBO Now) and watch Lemonade, what we now know to be the latest surprise visual album from Beyoncé.

It inspired think pieces galore, sent the Beyhive out to try and figure out just who “Becky with the good hair” was, got the academic treatment, and basically guaranteed that we would all listen to Lemonade on repeat for weeks to come. But for Tidal, the music streaming service owned by Beyoncé’s husband Jay Z, it also meant huge gains: After the visual album ended, Tidal was the only place you could stream Lemonade; Beyoncé even tweeted about it—and prior to that, she hadn’t tweeted since 2013.

#LEMONADE – the visual album by @beyonce only on TIDAL 🍋🍋 https://t.co/4DA3phH5Wg pic.twitter.com/JS2qivdRXU

With reports that Tidal would be the only place to stream Lemonade “in perpetuity” (and at the time, no information on when it would be available to purchase), many fans flocked to Tidal, whether eagerly or in resignation, to sign up for a subscription. If you already used your Tidal free trial (either 30 days or 90 days, depending on when you signed up), it would cost you $9.99 a month for Tidal Premium or $19.99 a month for Lossless High Fidelity sound quality (Tidal HiFi). And if you already paid for services like Spotify Premium or Apple Music, that was another monthly charge.

And in that regard, Lemonade was a massive success. Tidal received 1.2 million new sign-ups in the first week of the album’s release, up from 3 million back in March; in comparison, Apple Music has 13 million subscribers and Spotify Premium has 30 million. But Tidal’s number includes people who signed up for free trials, and there’s no indication of whether they’ll stay.

And besides, that window didn’t last long. Sure, Tidal may still be the only place you can stream Lemonade, but Tidal’s exclusive claim on Beyoncé’s album only lasted just over a day: Tidal lost exclusive rights to sell Lemonade at 10pm ET on April 24, and by midnight it would be available on iTunes. 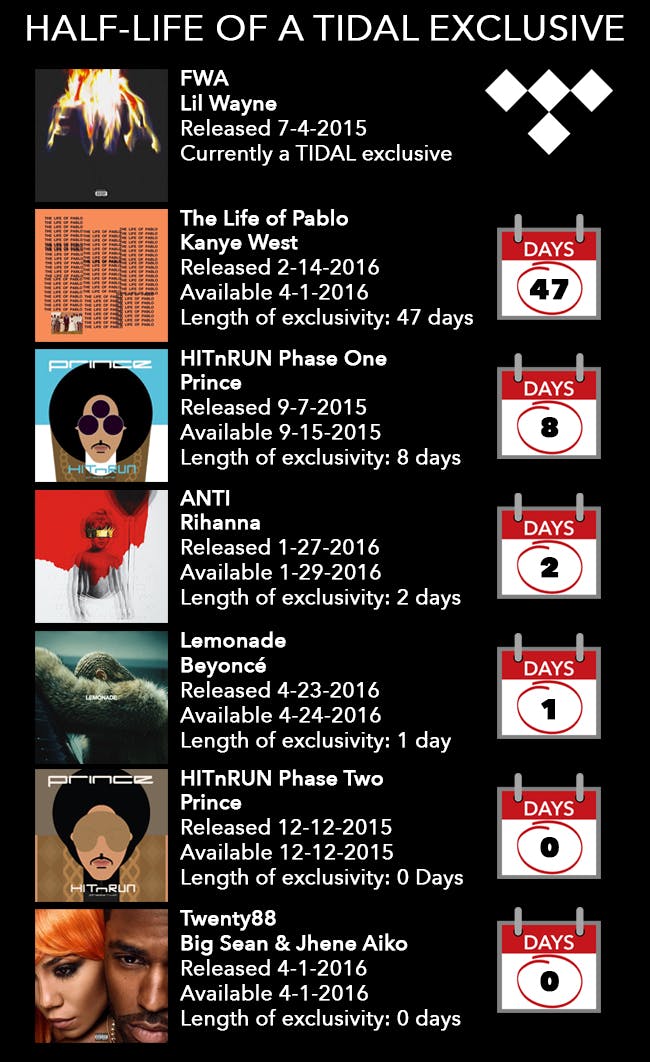 Note: Chart refers to albums, and not songs, videos, or livestreams included with Tidal.

On the surface, nothing went wrong with Tidal’s release of Lemonade. The music didn’t leak before HBO aired its special that night, and there were no noticeable technical issues, especially considering the flood of fans going online and downloading the app to listen. But in just 27 hours, the conversation went from Tidal’s exclusivity to finally being able to go anywhere but Tidal to get it legally for just a little less than the price of a one-month subscription to Tidal HiFi. In some circles, it went back to being a punchline.

Beyoncé Quickly Releases New Song About How Buying Tidal Subscription Most Empowering Thing A Woman Can Do https://t.co/4No6n4mb17

And what does exclusive even mean when those “exclusives” are available elsewhere in a matter of hours? (Even sooner if you include leaks.)

Tidal started out as a public Swedish and Norwegian company called Aspiro that offered a variety of services including music streaming in Europe, which Jay Z purchased for $56 million in early 2015. When it relaunched a couple months later, 12 other rock stars including Kanye West, Beyoncé, Nicki Minaj, Madonna, and Rihanna were announced as co-owners.

From the start, Tidal pledged to pay artists. In the relaunch, it told the Verge that it would pay double the standard royalty amount musicians receive from competing streaming services. (Which, given how royalties are regularly split among rights holders, is still abysmal.) Along with lossless music for double the price of a Spotify Premium or Apple Music subscription, Tidal promised to offer exclusive music, videos, livestreams, and playlists from some of the industry’s biggest names.

It was almost immediately met with pushback. Some of it came from fellow artists who criticized Tidal for benefiting the artists who were already rich and successful even without trying to improve streaming royalties. Mumford and Sons guitarist Winston Marshall called the co-owners “new school fucking plutocrats,” while frontman Marcus Mumford and Death Cab for Cutie’s Ben Gibbard believe Jay Z should’ve focused on smaller artists.

“If I had been Jay Z, I would have brought out 10 artists that were underground or independent and said, ‘These are the people who are struggling to make a living in today’s music industry. Whereas this competitor streaming site pays this person 15 cents for X amount of streams, that same amount of streams on my site, on Tidal, will pay that artist this much,’” Gibbard told the Daily Beast. “I think they totally blew it by bringing out a bunch of millionaires and billionaires and propping them up onstage and then having them all complain about not being paid.”

A month after it launched, Jay Z went on Twitter to tell everyone that “Tidal is doing just fine.” Shakeups from the executive team have raised concerns about whether Jay Z would one day leave too. According to a Billboard survey, 71 percent of music executives believe that Tidal will fold within a year.

A year after launching, Jay Z is planning to sue the former owners of Tidal for exaggerating how many subscribers Tidal had when he bought it. Yesh Music Publishing and American Dollar’s John Emanuele have filed a class-action lawsuit for millions in unpaid royalties and copyright infringement—and it’s far from the only one the company is facing.

And this isn’t even mentioning the issues with Tidal itself.

The streaming industry, still somewhat in its early days, is becoming tricky to navigate. Chances are you won’t be able to use just one service to listen to everything you want because of the increasing use of exclusives and exclusions. Spotify has the most users (75 million as of June 2015) and name recognition, but it’s received criticism for how little it pays artists and for not restricting content solely to Premium subscribers. Apple Music, built from Beats Music, got off to a rocky start after briefly planning to not pay any royalties to artists for its first three months. But it now has Taylor Swift making commercials—Apple Music is still the only place you can stream 1989—and exclusive albums from Future, Drake, and Chance the Rapper. Some artists, like Adele, refuse to stream on any platform. And true, Tidal has received exclusive songs, albums, and videos from West, Prince, Rihanna, and of course, Beyoncé.

But unlike the other platforms’ exclusives, a vast portion of Tidal’s have been plagued with a range of issues that still continue more than a year after its launch. The Yeezy season 3 livestream was ripe with technical errors and glitches. Anti was leaked by Tidal itself just before it was set to debut. Tidal claimed that Apple Music blocked a planned Drake livestream; Drake later said it was his decision to pull the plug. Tidal also couldn’t handle the traffic coming in from a new Madonna music video. At one point, Cash Money, Lil Wayne’s label, sued Tidal for claiming exclusive rights to Lil Wayne’s music, but nothing was ever filed. 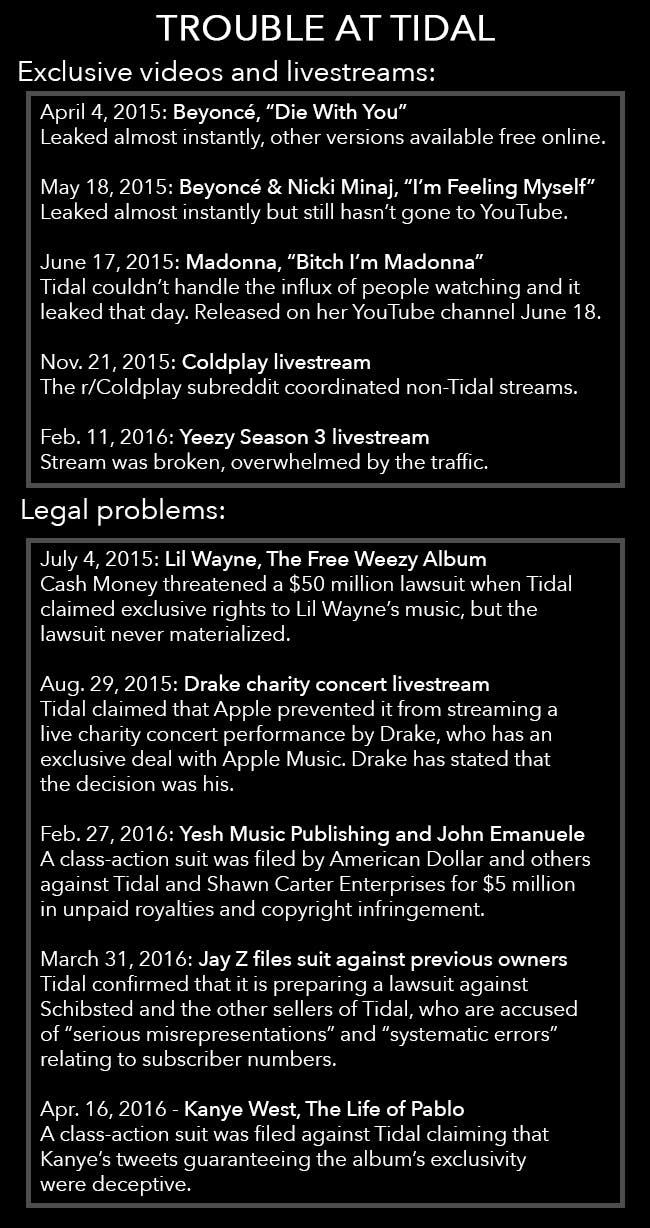 The Life of Pablo, the newest album from West that spent six weeks exclusively on Tidal before heading to Spotify, has presented its own set of problems. At the time—in the pre-Lemonade era of the Internet, that is—The Life of Pablo was seen as the big thing that would finally save Tidal. The exclusive window was meant to only last one week. It went for six—but not before West claimed it would only ever be available on Tidal.

Now Tidal and West are being sued in California for deceptive advertising and gaining subscribers under false pretenses.

And of course, as everything from The Life of Pablo to Anti and Beyoncé and Minaj’s “Feeling Yourself” music video has shown, content will leak almost instantly. Some of the people downloading torrents may support artists and want to see them get paid more, but they refuse to pay for Tidal to do it.

The exclusive window seems to be closing. While Lil Wayne can keep his album strictly on Tidal indefinitely, even Beyoncé—arguably one of the biggest artists in the world, a co-owner of Tidal, and the spouse of the person running the show—will only do restrict access for 27 hours. Others, such as Twenty88 and Prince, will exclusively stream on Tidal for an amount of time while simultaneously offering it to purchase on iTunes.

Some artists still may keep their music off places like Spotify, but the overall goal for artists is accessibility, not brand loyalty. And that’s probably not good for Tidal, which launched promising exclusives. Those boosts might help them in the present, but there’s no telling how many people will stay once those exclusives disappear (or the trial subscription runs out).

But the next time you see a Tidal exclusive surface online and you still have your trial handy? Maybe wait a few days to see if it pops up elsewhere before using it.