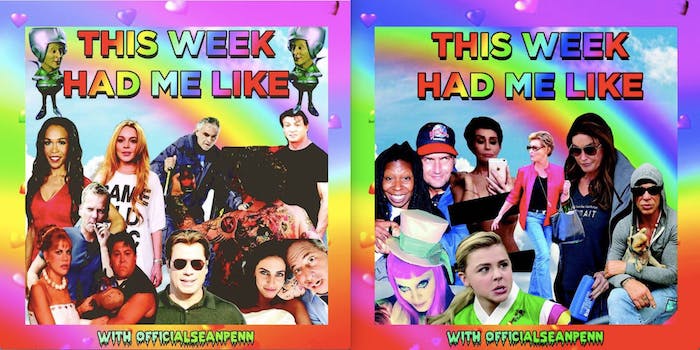 The cure to your over-saturated feed of jaw-dropping national bummers.

In a world of bitter daily news, This Week Had Me Like tastes like a bowl of Fruity Pebbles. The pop culture and celebrity gossip podcast is the cure to your over-saturated feed of jaw-dropping national bummers.

The brainchild of comedian and TV writer Caroline Goldfarb, and actress and producer Sarah Ramos, TWHML bills itself as “all the bizarre pop-culture news you didn’t know you needed to know.” It’s a beautiful rainbow of absurd celebrity brand endorsements, lovable D-listers grasping for the limelight, and juicy Twitter feuds.

Like many in the world of entertainment and comedy, Goldfarb, who is also the creator of the viral OfficialSeanPenn Instagram, was saddened by the results of the 2016 election. The political climate may carry a somber mood, but that isn’t stopping Goldfarb from finding joy in the ever-present world of celebrity gossip. On OfficialSeanPenn she posted uplifting images, like Hilary Duff taking a selfie with a fish.

Acclaimed actor/thespian/Westworld Daddy ANTHONY HOPKINS has an exhibit of his paintings going on RN in Vegas at the Bellagio. When. Will. Your. Faves?!??

Where else can you find the paintings of award-winning actor Anthony Hopkins, or the awkward vocal stylings of the Victoria’s Secret angels?

The podcast is a wonderful reminder that there is so much beauty left in the world. You just have to know where to find it.

This Week Had Me Like is available on iTunes and SoundCloud. New episodes are released every other week.