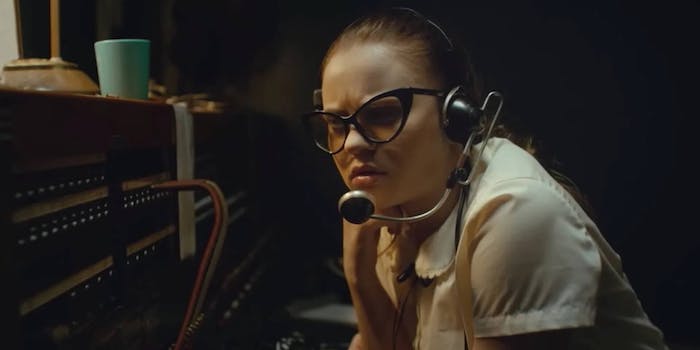 Review: ‘The Vast of Night’ is a refreshingly thoughtful sci-fi period drama

Set in the 1950s, this new Amazon film is a stylish twist on an old-school 'Twilight Zone' concept.

On a balmy night sometime in the 1950s, the people of Cayuga, New Mexico gather to watch a high school basketball game. There’s not much else to do in a small town like this. Radio technician Everett (Jake Horowitz) gets called in to handle some mishap with the game’s announcing equipment (a squirrel chewed through the wires again?) and we follow him into the bustling gymnasium and then out again, where he meets up with a chatty, academic teenager called Fay (Sierra McCormick), who needs help testing a new tape recorder. For the first twenty minutes of The Vast of Night, we barely see a single character head-on. Instead, we’re slowly reeled into a series of meandering, naturalistic walk-and-talk conversations, as Everett escorts Fay through the deserted streets to her job at a switchboard, the camera following them at a distance. She’s due to spend the night alone connecting calls at the switchboard office, while Everett will host the local radio show—a broadcast that surely won’t have many listeners while half the town is busy watching basketball.

The Vast of Night

RELEASE DATE: May 29, 2020
DIRECTOR: Andrew Patterson
STREAMING: Amazon Prime
This low-budget sci-fi movie makes the most of its 1950s setting, a slow-burn drama unfolding over one night in a small New Mexico town.

This unusually sedate opening could be dull in other hands, but here it’s effectively immersive. Impressively, this is the debut film for the main creative team: director Andrew Patterson and writers James Montague and Craig W. Sanger, who embrace the 1950s setting without getting too pastiche-y. A Twilight Zone-inspired framing device (which to be honest isn’t actually necessary) tells you what kind of vibe they’re going for: an old-fashioned sci-fi mystery with plenty of character and almost no special effects. You could easily imagine it as a radio play, considering the dialogue-heavy script and the focus on audio technology. The Vast of Night’s patter manages to flow so naturally that 1950s slang like “razzle my berries” somehow doesn’t sound twee.

Alone at the switchboard, Fay begins to notice a strange sound on one of the lines, and phonecalls being interrupted for no reason. At the same time, something messes with Everett’s radio broadcast. Clearly something strange is going on in Cayuga, and the two of them decide to investigate. They’re not exactly friends so much as cordial partners: 16-year-old Fay brimming over with enthusiasm and curiosity, while Everett (a few years older) has a little more experience, explaining things in a good-humored way that only sometimes dips into condescension. The whole film takes place over one night, with Fay and Everett running around town in a cross between a troubleshooting project and an adventure story about plucky young newspaper reporters.

The Vast of Night reminded me a little of the cult hit Primer, although it’s warmer and much easier to follow. Both films view their main characters with a sense of detachment, with long sequences of them discussing technical jobs with zero traditional exposition. Not something you see in mainstream sci-fi movies with a bigger budget.

At the other end of the scale, the film’s most obvious influence is 1950s sci-fi flicks like The Blob. Best known for being Steve McQueen’s debut film, The Blob is less schlocky than you’d expect. Obviously a Blob is involved, but otherwise it’s a refreshingly sensitive story about teens and adults in small-town America. Since then, 1950s American teenagers have become a cinema staple, usually boiled down to stereotypes: jocks, nerds, rockers, cheerleaders. The Vast of Night steers clear of all that, with Fay and Everett as a pair of talkative, easygoing locals who seem to know every person in town, avoiding the usual clichés for awkward, bespectacled geeks.

The film’s sci-fi conceit is a slow burn, and while it’s not a twisty kind of plot, I’d recommend skipping the trailer. Just let the story unfold. Much of the screentime is dedicated to long, wordy conversations and monologues, although when the camera actually gets moving, there’s some great stuff in there. One standout sequence involves a three-minute shot traveling through the town at knee-height: too fast and too low down to feel natural, removing the sense of us watching from a human perspective. We (embodied, I assume, by a drone camera) eventually arrive at the gymnasium, where the basketball game is in full swing—still captured by the same uninterrupted shot.

With a succinct 89-minute runtime, this low-fi drama is a good fit for streaming; a thoughtful, well-constructed little film that doesn’t need a big screen to make an impact. A chill and satisfyingly original take on some old and very familiar sci-fi tropes.

The Vast of Night arrives on Amazon Prime on May 29.