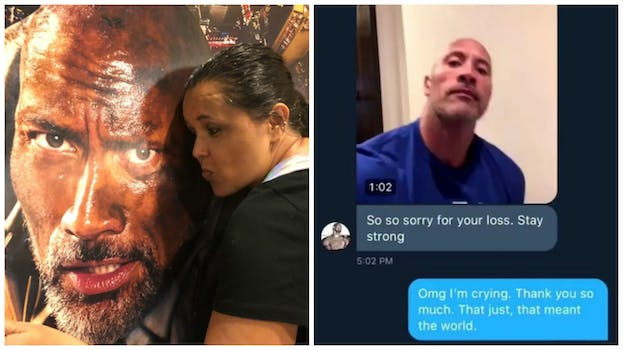 'I’m sending you so much love and light and strength your way.'

A few days after a fiery car crash involving a YouTube star killed him, a mother, and her daughter, Dwayne “the Rock” Johnson has sent a message of support, saying he was sending “light and love” to the family of the mother and daughter.

Last week an 18-year-old YouTube gamer named McSkillet, aka Trevor Heitmann who has 877,000 YouTube subscribers, was driving the wrong way on a Southern California highway at speeds of reportedly up to 100 mph when he crashed head-on into the car of 43-year-old Aileen Pizarro and her daughter Aryana. All three died on the scene.

Aileen’s 19-year-old son on Saturday tweeted to Johnson that his mother was a big fan and that he hoped the mega-star could send a tribute that could be played at the funeral.

My beautiful mom who passed away loved @TheRock so so SO much. I’m trying to get him to do even a video saying her name for the funeral. If you could retweet the crap outta this for him to see it that’d mean the world. Thank you! pic.twitter.com/ypr4ZJzMxw

With that tweet generating more than 40,000 retweets and 27,000 likes, Johnson took notice and responded on Sunday.

In his 62-second long video message, Johnson said he received thousands of tweets about the loss of Aileen and Aryana, and he implored Angelo Pizarro to stay strong.

“I’m sending you so much love and light and strength your way, from my family to yours,” Johnson said. “I’m so sorry to hear about your sister and your mom and this tragic loss your family is going through. If your mom could see me now, which I’m sure she can, I just want to thank her for all the love and for being such a big fan.”

@TheRock THANK YOU SO MUCH SIR. I hope everyone knows how amazing you are. I can’t stop smiling knowing she’s smiling so much. Just, thank you. And again thank you to every single person who viewed my post (now over a million). pic.twitter.com/tQisyRGgVT

Angelo Pizarro could hardly believe it, writing on Twitter, “THANK YOU SO MUCH SIR. I hope everyone knows how amazing you are. I can’t stop smiling knowing she’s smiling so much. Just, thank you. And again thank you to every single person who viewed my post (now over a million).”

It’s something Johnson has done for his mega-fans in the past, including sending a message of love and support for journalist and former Daily Dot contributor Feliks Garcia after he unexpectedly died in 2017.

In the aftermath of the crash, a GoFundMe account was set up in the name of the Pizarro’s—which, as of this writing, has collected more than $53,000 from more than 1,000 people.