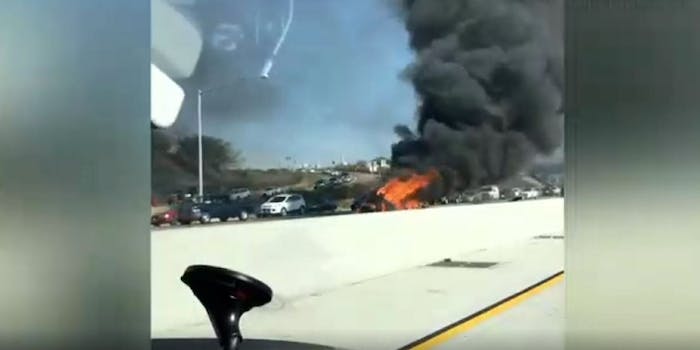 A 43-year-old woman and her 12-year-old daughter were also killed.

An 18-year-old gamer who had hundreds of thousands of YouTube subscribers was killed Thursday after he was involved in a head-on collision at more than 100 mph that also killed two others.

McSkillet, whose real name was Trevor Heitmann, was driving the wrong way on a southern California highway when he crashed into a car driven by a 43-year-old woman, according to BuzzFeed. The collision killed McSkillet, the woman, and her 12-year-old daughter, and the accident caused five other cars to crash in the fiery scene.

On his YouTube channel, where he had 877,000 subscribers, McSkillet mostly posted gaming-related videos. Last December, he vlogged about his new McLaren sports car—the car he was driving when he crashed.

According to the Los Angeles Times, a person who called 911 to report the crash said, “The whole northbound side [of the freeway] is on fire.”

As BuzzFeed wrote, “He reportedly made his money selling and trading so-called skins, graphic visual designs for weapons in the online game Counter-Strike: Global Offensive that are meant to be aesthetic and don’t affect game play. Although the game industry cracked down on his skins, he also made money through his gaming and corporate gaming sponsorships.”

His fans expressed their shock and sadness on Twitter.

Genuinely one of the nicest guys I’ve met since starting youtube, @OG_McSkillet THIS CANT BE REAL MAN ;(

Just hearing all this shit about @OG_McSkillet and not really sure what to think. I don't have all the details so I won't comment on the specifics but Made a video with him back in the day and he was a nice kid.

On Twitter, @RDGayBowser wrote, “This isn’t a hoax. He was my best friend in real life and I’ve been dealing with this pain for the past two hours. Everyone please spread love and support, he was battling an incredible rough time and we need to show support.”

Another friend told Polygon that they didn’t know how to respond.

“I knew him so well in middle and high school, he was a really good person and we had a lot of great memories together, but now learning about all the tragedy he caused for the people who died, I don’t know what to feel,” the person said.

According to Fox 5 San Diego, the family of the other victims has created a GoFundMe account for 43-year-old Aileen Pizarro and her daughter Aryana, who was set to begin seventh grade this Monday.