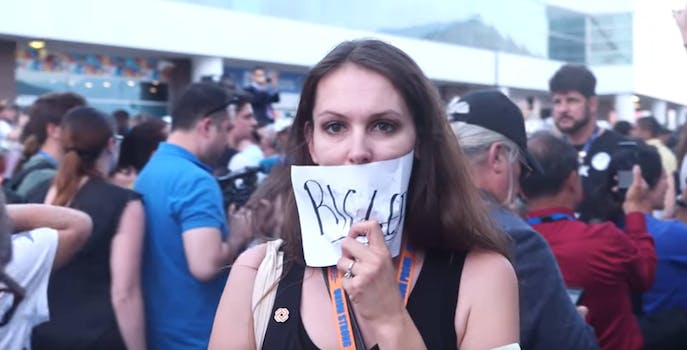 A look back at the DNC’s most emo attendees

Bernie Sanders fans were all up in their feelings.

The 2016 Democratic National Convention, held in Philadelphia this week, was filled with historical speeches, celebrity cameos, and a bunch of really emo attendees.

Yes, emo, that left-behind musical phase everyone tries to forget. The adolescent era where many feel misunderstood by the world and neglected emotions ran through daily thoughts.

People who made their appearance, whether inside or outside the convention, let their guards down to show how they really felt about the political race that is taking our country for a roller coaster ride.

Besides the absent thick eyeliner streaming down faces and beaded bracelets stacked up to their elbows, many DNC delegates had themselves an existential crisis.

Stephen Colbert showed up at the DNC on opening night looking blue, which fit his suppressed mood.

The moment when Lance Bass realizes he is all alone in a room filled with Democrats, but proceeds to act like he is alright.

One of the recognized signs of being emo—malnutrition.

OK, Bill Clinton is 1000% about to pass out from his Paleo diet #DemsInPhilly pic.twitter.com/6DVWdEk2sr

Crowds talk over Gov. Jerry Brown of California, during his speech, and it looks as if he is internally screaming.

DNC crowd chants “Jerry! Jerry!” for California Gov. Jerry Brown: "That sounds good, but I only got 5 minutes." pic.twitter.com/5bRHzEvL2Z

Of the most emo in attendance, supporters of Bernie Sanders made it no secret they were rebelling against Sanders’s endorsement of the Democratic nominee Hillary Clinton.

Susan Sarandon was caught looking miserable, owning up to it in a reply tweet an hour later.

Susan Sarandon is having literally the worst time at the #DemConvention pic.twitter.com/Ola9Hi3y5o

On night three of the DNC, President Barack Obama embraced Hillary after a tear-jerking speech—sending us all in a flurry for emotional support.