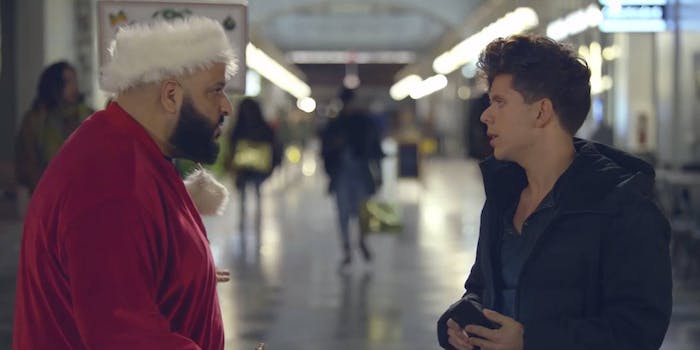 It’s time to bless up for the holidays.

It’s time to bless up for the holidays.

On Monday YouTube Red releases its first original holiday special, The Keys of Christmas, delivering a sleigh full of entertainment.

Hochberg, who partnered with YouTube Red for the special, has a background in collaborative content development, producing The Apprentice and TNT’s The Great Escape, just to name a few.

“My wife calls me the Forrest Gump of business,” Hochberg says, alluding to his success in previous television endeavors as well as the tech industry. He says the great thing about entertainment these days is that anyone can do it. All you need is a computer, phone, and free Wi-Fi from Starbucks.

“It’s no longer up to a handful of people to create,” he explains. “It’s up to anyone that wants to make content and I think that’s why we are seeing an explosion of diversity, and an explosion of new content by new voices.”

That’s exactly what this special highlights. It’s full of stars that have taken it upon themselves to become their own brands, whether it be DJ Khaled’s insatiable Snapchat adventures, or the fluffy-haired Mancuso’s crossover success.

“Having Rudy in The Keys of Christmas is a great example of this,” Hochberg says. “He is someone who is self-made, he is highly talented. He writes his own music and performs it. He’s even opening up for Justin Bieber next year on tour. And many of the people in the movie are friends of his. He is a great example of the world we live in and how to make it translate on to TV.”

In this over-the-top holiday special, Mancuso realizes he is missing a piece of himself. With a little help from a few other trending stars, he sets off on an adventure to rediscover what he’s missing and stop Christmas from totally sucking. That is of course after he sings a song about why he thinks Christmas sucks. Spoiler alert: He has a change of heart and the spirit of the holidays overcomes all odds.

Hochberg says he’s happy to be part of a special that emphasizes diversity and overcoming odds.

“Christmas and the holidays is a global sentiment,” Hochberg says. “It is without borders of geography, race, color, personality, point of view, or political association. It is a sentiment that transcends the religion of sharing and caring.”