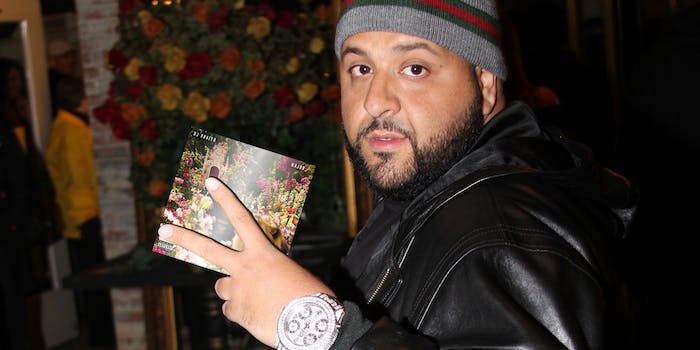 I met DJ Khaled for 5 seconds, and he promoted his album on my Snapchat

DJ Khaled has been walking the pathway of success over the last year by obsessively utilizing social media—even if it’s not necessarily the time and place.

While walking toward the Beverly Hills Hotel last week, I looked at a parked car to my left and there he sat, letting the top down in his smokey grey Rolls-Royce convertible. Spotting celebrities in Los Angeles happens, so I threw him a casual finger point and requested to take a Snapchat with him. DJ Khaled took this as the perfect opportunity to self-promote his upcoming album Major Key. To my micro audience of followers.

The self-promotion doesn’t stop there.

For Khaled, Snapchat and Instagram are used as a way to send messages, or alerts, to fans. Through his social media presence Khaled has become famous for letting us know what he is doing, what he likes to eat, and most of his daily thoughts. He’s by far the most omnipresent hip-hop artist on social media.

Remember when he got lost on a jet ski? Snapchat was there to rescue him.

Khaled realized the key to gaining a large following is to self-promote his appearances and new collaborations at every turn. He reaches 3.5 million followers on Instagram, making it a pivotal tool for shining the spotlight on his musical empire.

Likewise, Khaled posted his first-ever Facebook livestream on Wednesday from his tour bus.

Khaled was confused on how to work the livestream, often only showing his forehead and asking if viewers can see him. It wasn’t too long after figuring it out that he began repeating Khaled-centric catchphrases like “I got the keys, keys, keys, keys” while getting close to the camera to check his handsome self out.

We will check the album out—don’t worry—but for the meantime, keep paving that path to success.