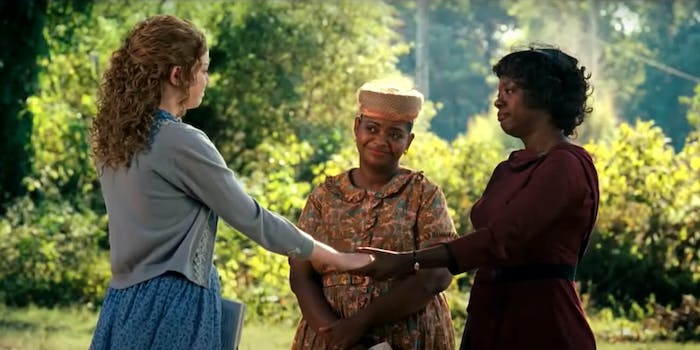 There are so many other films you could watch instead.

Support for the Black Lives Matter movement is growing, and people are donating their money, sign petitions, and joining anti-racism and anti-police brutality protests. There’s also been an increased interest in education about race via literature and movies. But as people are sharing resource lists, a very different movie is surging in popularity.

In February, Netflix unveiled its Top 10 feature, a way subscribers can get a sense of what’s popular. For the most part, the lists are usually a list of whatever Netflix originals just came out, nostalgic favorites getting a boost (e.g. Avatar: The Last Airbender), or new movies. The 2011 film The Help, which arrived on Netflix on June 1, is already the most popular film on Netflix; it’s currently the fifth most popular title overall.

“‘The Help’ trending on netflix is all we need to know about how some ppl are educating themselves,” Ashanté M. Reese wrote.

The Help, based on Kathryn Stockett’s novel of the same name, follows a young journalist (Emma Stone) who tells the story of the racism Black maids Aibileen Clark (Viola Davis) and Minny Jackson (Octavia Spencer) endured while working for white families in Jackson, Mississippi. The film was a staple during awards season and led to Spencer winning her first Oscar. But the film came with its own set of controversies.

Like The Blind Side before it and Green Book and Harriet after it, The Help has been criticized for having a white savior narrative at its center. It makes a story about racism during the civil rights movement palatable for white viewers by centering white characters over Black characters and including sympathetic white protagonists who discover that racism is bad.

Time and time again, voting bodies have proven that it’s one of the few narratives in movies by Black characters that are acceptable to award. The vast majority of women of color nominated for acting Oscars—including both Spencer and Davis for The Help—have portrayed maids, nannies, and slaves. Other films that offer more complex non-white characters like Hustlers and the Martin Luther King Jr. biopic Selma are overlooked, or in Selma’s case, retaliated against after the cast and crew protested against racism at a premiere. In Green Book’s case, the more palatable message likely played a role in its 2019 best picture win at the Oscars.

Critics have objected to The Help since its release, so the criticism lobbied against the film amid its arrival on Netflix—and a growing interest in watching Black stories and movies made by Black filmmakers—isn’t necessarily new. For one, Ablene Cooper (the woman who Davis’ character is based on) sued Stockett for $75,000 for using her likeness and image in the book, but the case was dismissed by a judge in 2011.

It’s also a film that Davis now regrets doing because of how much The Help centered the story around the white characters.

“I just felt that at the end of the day that it wasn’t the voices of the maids that were heard,” Davis told the New York Times in 2018. “I know Aibileen. I know Minny. They’re my grandma. They’re my mom. And I know that if you do a movie where the whole premise is, I want to know what it feels like to work for white people and to bring up children in 1963, I want to hear how you really feel about it. I never heard that in the course of the movie.”

In the wake of The Help’s newfound popularity, Black critics have suggested other films to watch, and studios and streaming services have made some of these films and documentaries free to watch. 13th, Ava DuVernay’s documentary on the U.S. prison system, is available to watch on YouTube without a Netflix subscription. Both Just Mercy and Selma are free to rent during the month of June. The Criterion Channel removed its paywall and made several films and documentaries by Black filmmakers and centered around Black stories free to stream without an account. And Shudder just made the documentary Horror Noire: A History of Black Horror free to stream on its streaming service.