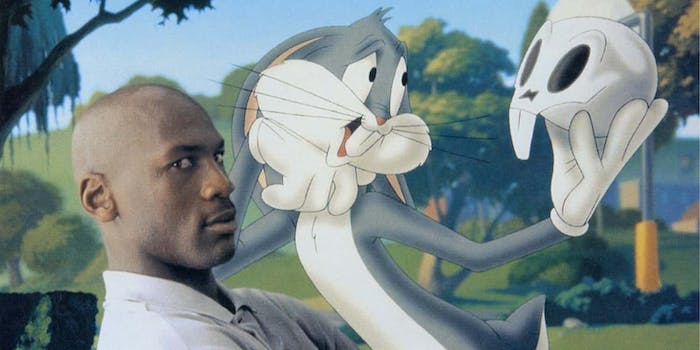 The 14 songs from the ‘Space Jam’ soundtrack, ranked (updated)

You definitely remember the best of these tracks.

Update 9:46am CT, May 15: The Space Jam soundtrack is now on Spotify. Not all of your favorite classics are present, but it’s a start.

American pop culture is often shaped by the recent past, looking back 20 years for its regenerating waves of nostalgia. And so Michael Jordan’s 1996 crossover picture Space Jam is having a moment, with news on Tuesday that the project is getting a vinyl reissue.

This makes sense: No one bothered to preserve their Space Jam CD, and their parents probably ditched it when they went to college; the soundtrack isn’t featured on Spotify; and karaoke renditions of “I Believe I Can Fly” are (unfortunately) at an all-time high. Plus, it’s a sonic masterpiece.

While its accompanying film was an inventive marketing strategy that fused basketball, outer space, and appropriated America’s obsession at the time with drawing the Looney Tunes as rap-savvy street ballers, the soundtrack brought in giant pop voices and had them write inspirational songs for the inner city. Chris Rock and Barry White told jokes. Bugs Bunny rapped. R&B’s most fly vocalists joined forces to croon about basketball. You know and love these songs, but which was the best?

Boy did ’90s pop love to crib disco hits from the ’70s and give them rap reboots. This doomed alliance was played during a Charles Barkley montage in the film, and it retains all the dignity of a Barkley rant on Inside the NBA after a late-night West Coast game.

Jay Z did a fair amount of ghostwriting before he became a pop star in 1998, most infamously by helping Bugs flesh out his skills on the mic. So that’s a fun fact, but make no mistake: This brick has always been joyless and unlistenable.

“Show My Love” singer Robin Stone offered the soundtrack’s curveball, with a dance and house-fused retread of her original hit. It was crafted for NBA shootarounds from the John Starks era, but without the sizzle to survive into the 21st century.

A moving song that would later be covered by Christina Aguilera, and certainly one that checked the soundtrack’s core value of inspirational balladry. But otherwise, like All 4 One itself, this ’90s R&B slow dance offering went rightfully lost to the sands of time because the harmonies and presence failed to craft a memorable identity.

It’s another fairly disposable ’70s disco hook pasted on a rap song! But certainly one with juice, and dueling raps about hot men working out. There’s so much flair and personality on the verses that you can excuse the throwaway revival of  Diana Ross’ original.

After thrilling audiences with early ’90s breakout hits, the soulful Seal could do no wrong. Then he covered the Steve Miller Band. Yet, old millennials such as myself didn’t know that this wasn’t a Seal song, and we loved the project’s side-A-track-1 offering all the same.

“Take your time and educate your mind,” Coolio rapped to the kids in ’96. This is ride-or-die music for when you’re in a public service announcement about bullying. Be a leader!

This was welcome comic relief, complete with TLC-inspired flair.

6) R. Kelly featuring Changing Faces and Jay Z — “All of My Days”

“All I want is to be with you, all of my days,” forgotten R&B girl group Changing Faces sings on this Kelly and Hova duet. Given the revolting sexual assault allegations weighed against Kelly years later, the anonymous, doomed, heartsick singing on this track remains chilling. When Jay Z raps about going “house shopping,” you don’t believe he’ll ever go through with the commitment. This track stunningly, inadvertently channels the hopelessness of being scorned and discarded by love. It’s a sonic compatriot to LL Cool J’s “Hey Lover,” but with reversed gender roles to undercut the false promises of the protagonists.

Not as good as “I Believe I Can Fly”—but closer than you think, in terms of cathartic highs.

Before becoming frustratingly enigmatic and stingy with his output, D’Angelo was prodigious. This throwaway R&B project, muscular in its live instrumentation and effortless cool, brought first-class finesse to a movie about basketball with cartoons.

Ah, the reckless abandon and club pulse of Florida’s most fun sound machine, those Quad City artists who owned 1996 with their Miami bass grooves. This caffeinated jam endured for most of the ’90s as a marching band staple. Wave your hands in the air if you feel fine, we’re going to take it into overtime.

This one is simply an all-timer when it comes to after-school anthems about saying no to drugs. From the church choir to the cornfield, this is meticulously planned community activism. You can hoop like Jordan, metaphorically speaking, the song implored. Don’t stop believin’ in this totem for Allan Greenspan-era economic optimism. If you can see it, then you can buy $120 Pippens and dunk it.

In the film, Jordan’s antagonists are possessed NBA stars who become body-snatched by aliens and play against him. Those real-life all-stars—Charles Barkley, Shawn Bradley, Patrick Ewing, Larry Johnson, and Muggsy Bogues—never did win a title in their careers: Call it the curse of the Monstars. But on wax, the five most thrilling rappers of 1996 joined forces for a brilliant posse cut that is better than most latter-day Wu-Tang records.