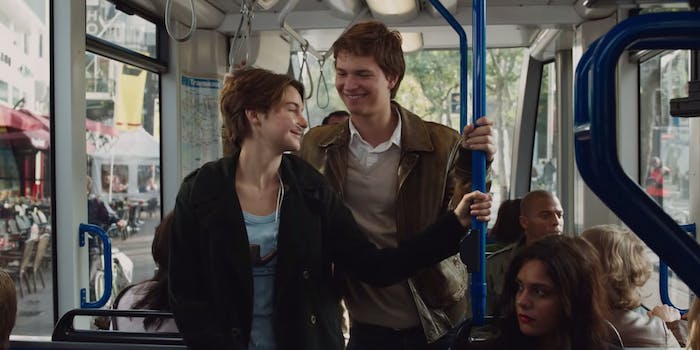 The fault is definitely not in our marketing department.

Despite predictions that the recent boom in film adaptations of Young Adult novels is on the wane, there’s one major contributor to the recent YA film pantheon that’s yet to come.

And according to its fans on YouTube, it’s already the most popular of them all.

The upcoming film adaptation of Vlogbrother and YA star John Green‘s acclaimed bestseller The Fault In Our Stars has been burning up the Internet. Its trailers and teasers have spawned instant Tumblr memes and racked up huge hit counts.

Now,  the official trailer has become the most-liked YouTube video of all time.

With over 273,000 likes and 18 million views, TubeFilter notes the YouTube trailer, which premiered in January, has one like for every 63 views. That’s well over the previous record set by the trailer for One Direction: This Is Us.

Meanwhile, 20th Century Fox has been promoting Amsterdam, a city that features prominently in the novel, teasing fans with images of the movie’s two stars, Shailene Woodley and Theo James, on the town.

Not to be outdone, fans have begun to create their own personalized book tours of the city, complete with tourist stops for the places described in the book.

Despite modern YA being considered a “golden age” for the genre, the recent glut of films targeted at Young Adult readers in the post-Twilight, post-Harry Potter era has made some industry watchers skeptical that the trend will remain profitable for Hollywood. But while last year’s Beautiful Creatures, The Host, and The Mortal Instruments were all flops, The Hunger Games continued to soar at the box office, and the dystopian Divergent (which also stars Woodley and, weirdly, James as her brother) had a successful performance and has been extended to four more films. Meanwhile, the upcoming Maze Runner, another dystopic hit, has a box office draw that should bring all the Teen Wolf fans to the yard: heartthrob Dylan O’Brien.

But of them all, Green’s novel has gotten boosts from two unexpected places: the YouTube community, where his fandom of Nerdfighters guarantees the success of his and brother Hank Green‘s many, many projects; and among the literary establishment, where Green is often hailed, albeit erroneously, as the crown jewel of realistic Young Adult fiction.

While not everyone loves TFIOS, it’s hard to deny that it’s one of the most notable bestsellers in recent memory. Between its popularity with its core audience of teens and its ability to extend its reach into adult reading and Internet communities, TFIOS could be one of the few must-see movies of the year. That’s not something you normally hear about a YA property—but then again, between hits like Harry Potter, The Hunger Games, and TFIOS, we might be on the path to acknowledging what we should have known long ago:

YA fans have great taste.