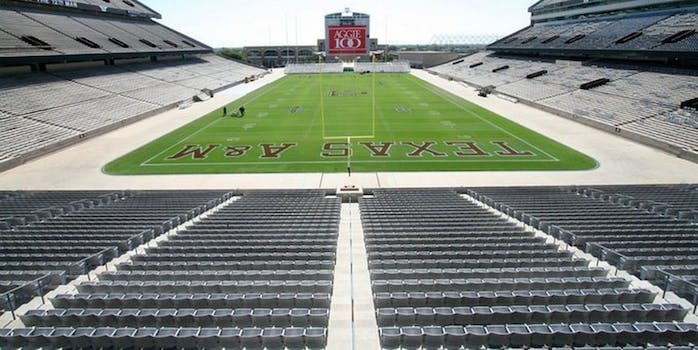 Texas A&M wide receivers coach Aaron Moorehead heard the news that one of his team’s prized recruiting possessions had decided he no longer would attend the school, and apparently, he couldn’t help himself.

Moorehead went straight to Twitter and went on a rant that might have cost his program more top-notch recruits and certainly produced plenty of embarrassment for the Aggies program.

And though Moorehead’s social media snafu made big headlines Thursday—and forced Texas A&M coach Kevin Sumlin to address it on the Southeastern Conference media teleconference—recruiting analyst Brian Snow doesn’t expect Moorehead’s mistake to have a lasting effect on the Aggies program. But he also said participating on social media sites are a fine line for coaches to walk.

“This is unfair to the coaches, because they’re not allowed to have a voice [in the recruiting process, due to NCAA rules],” Snow, a recruiting analyst for Scout.com, told the Daily Dot on Thursday. “But you have to know this is part of the deal, that you can’t say what he said on Twitter.”

This was certainly an embarrassment for Texas A&M.

It began Wednesday night when a high school quarterback named Tate Martell—the country’s top-rated “dual-threat” quarterback who had originally committed to play collegiately at Texas A&M in August—changed his mind.

I love Texas A&M football. I guard it and respect it with my life. I don't take that lightly day to day

Clearly, Moorehead should have known better. He’s a former NFL receiver who went through the recruiting process when he was in high school and before he committed to Illinois, and as a college football coach, he surely understands that it’s not uncommon for 17- and 18-year-old kids who have committed to a school to change their minds.

Also, it should be noted that Moorehead has had three jobs in six years as a college coach, slightly tarnishing his Twitter tutorial on team loyalty.

But since the Aggies have struggled recently and considering two highly recruited quarterbacks who already were on the roster have transferred out of the Texas A&M program, the loss of Martell’s commitment must have stung the staff. But for Moorehead to express his frustration on Twitter was obviously a mistake.

“It’s just not a good look,” Snow said. “I’m sure if he could have it back, he’d take it back. But in this day and age, you can’t have it back. He’s going to pay the piper on that one.”

The real damage, though, came in the aftermath of Moorehead’s original rant.

SB Nation wrote, “Two of the top three recruits in the state of Texas responded with laughter emojis [and] blue-chip Texan Eno Benjamin [said] A&M will be ‘trash’ without Martell (all since deleted).”

Tyjon Lindsey, considered the nation’s fifth-best high school receiver who wasn’t necessarily expected to join his friend Martell on the Aggies roster anyway, tweeted that he also no longer was considering Texas A&M.

On Thursday morning, Moorehead—who, through a Texas A&M spokesman, declined comment to the Daily Dot—backtracked.

Asked about Moorehead’s original rant on Thursday’s SEC media teleconference, Sumlin, via the Dallas Morning News, said ” Let me say, this: I was made aware of it. I have addressed it with Aaron. We’re still working through that. He’s taken responsibility for his actions and we’ll move on from there. Basically, that discussion has been had. Obviously, Aaron has taken responsibility from what he did. “

“There’s the reality that, as a society, we forget things in, like, two seconds,” Snow said. “Seventeen-year-olds are even less than that. Starting tomorrow, I bet this is a non-story. Kids won’t think twice about it. You just look like a buffoon in the moment, and then you move on to something else.”

While these kinds of coaches comments are rare, social media is still an important tool and they continue to need to hone their approaches to Twitter. After all, decommitting from social media is not an option.

“Coaches will get more experience using it,” Snow said. “They’ll learn the boundaries better. The more you deal with it, the more familiar you get with it. … [But] kids are on social media. Even though it might be a fake relationship, if this kid follows you on Twitter and feels like he knows you on social media, he feels like he knows you, period. And recruiting is all about relationships. If a 5-star quarterback is following a coach on Twitter and he says, ‘That coach seems like a cool guy,’ that’s only going to help you.”