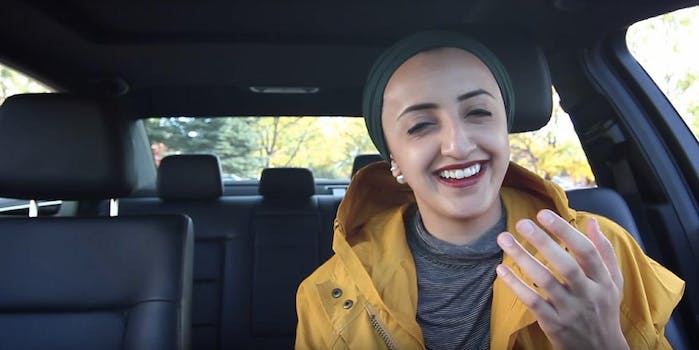 Tazzy Phe is tearing down Muslim stereotypes on YouTube

As a young Muslim girl growing up in Colorado, Tazzy Phe is here to check YouTube’s privilege.

Tazzy Phe is someone you want to be in your corner, on your team, or in your back pocket, ready to pull out as an ally when things get tricky.

Quick-witted with a deadpan sense of humor, 24-year-old Tazzy was inspired to make videos by the same force that pushes many to start YouTube channels: boredom. Stuck at home one summer between college semesters, Phe took four days to write, film, and edit her first video, “I Don’t Understand White People.” It lived on social media for 15 minutes before her nerves got the best of her and she took it down. But in that time, one of her close friends saw the video and asked if she could share it. From there, the video gained over 200,000 views and caught the attention of JusReign, a Canadian writer and spoken work poet Phe now considers a good friend and collaborator.

Since then, Phe has become a force to be reckoned with. Over the past three years, she’s grown her channel to include videos about her daily life (“24 Things I’ve Learned in 24 Years,” “Why Are Girls So Much Drama?”), comedy sketches, and vlogs talking specifically about her Muslim identity. Her videos such as “Types of Hijabis” and “Hijabi Nightmares” (along with countless others) take a comedic approach to dismantling stereotypes and assumptions made about women wearing hijabs, while her vlogs like “My Hijab Story” take a direct approach to discussing how racism—especially in college—affected and eventually strengthened her decision to wear her hijab. Though confident in her decisions (get it, girl!), Phe still comes under fire from members both inside and outside the Muslim community. Recently, after receiving criticism for how she wore her hijab in a recent vlog, she took to Twitter, saying:

I'm so sick of all the hijab critics. pic.twitter.com/6r0J6QWoFK

For other young Muslim women, Phe’s empowering content both addresses the hijab and spotlights her daily life, showing that religion is only one part of her life (along with a love of music, media, and Kanye West). For viewers outside the Muslim community, Phe creates awareness around Islam and educates thousands about a culture often tarnished by stereotypes.

So Tazzy, thanks for being such a badass boss on YouTube and cheers to your many projects to come.