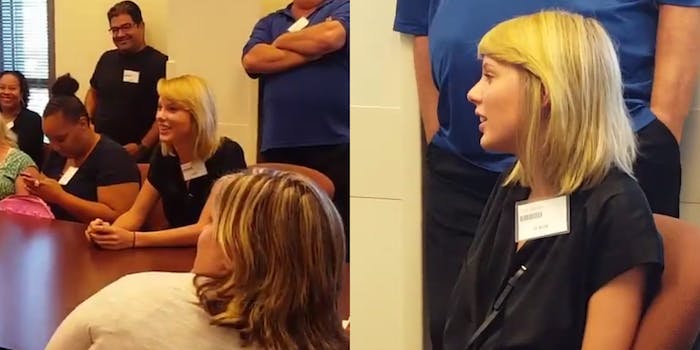 Taylor Swift skipped the VMAs to do jury duty in Tennessee—and people are posting selfies from the jury room.

Some celebrities avoid jury duty by claiming work commitments (Samuel L. Jackson) or distracting the other jurors with their fame and beauty (Brad Pitt), but Taylor Swift apparently couldn’t find a suitable excuse.

This week, she drew the short straw and is doing her civic duty. And someone is livetweeting from inside the jury room.

Twitter user Tracy Bates has been tweeting updates from the jury room all morning, showing Swift taking selfies and signing autographs—including Bates’ copy of The New Jim  Crow, a nonfiction book about mass incarceration. Probably the first time Swift has signed that particular book, but who can know for sure?

Bates also posted a video of one juror talking to Taylor Swift about her music, while everyone else seemed surprisingly chill and unconcerned about having an A-list star in their presence.

This whole situation looks like a fun way to get dismissed from jury duty, since jurors are discouraged from using social media during a trial. Likewise, filming inside a jury room can, understandably, cause problems. But at least Swift has a good excuse for not showing up to the VMAs on Sunday night: She had to be in Tennessee to uphold justice among her fellow citizens.

Update 2:44pm CT, Dec. 19: The Bateses have removed their tweets from Twitter, leaving readers to imagine this marvelous chance encounter instead.