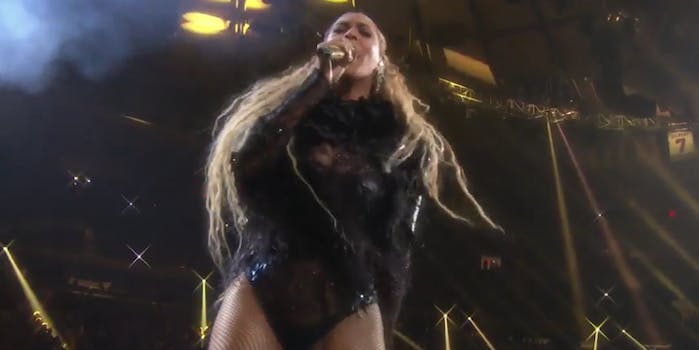 Beyoncé slays the VMAs with ‘Lemonade’ performance, wins video of the year

Ashes to ashes, dust to anyone who had to perform after.

Beyoncé hijacked the MTV Video Music Awards once again on Sunday with a 15-minute, high-energy, cinematic performance of selections from her visual album Lemonade. Then she won video of the year—and the VMAs in general.

The queen made quite the entrance with the slow ballad “Pray You Catch Me” while rocking an all-white, floor-length cloak. The holy imagery lingered in the audience as dancers dropped to the ground one by one—turning red, fainting as if just shot—with Beyoncé approaching front and center.

Wearing her next costume under the cloak, there was no outfit change necessary for the bootylicious segment of her second selection, “Hold Up.”

Rocking an all-black unitard laced with feathers and jewels fit for the queen herself, Beyoncé let her backside do most of the talking with a twerking two-step in her knee-high, red-bottom boots.

Bey used red and blue strobe lights to transition into the hit single “Sorry,” possibly a jab at those accusing her of being anti-police following her Super Bowl performance this year. Back in February, her dancers rocked Black Panther-inspired costumes and drew criticism for their political subtext.

The next song in her stack, “Don’t Hurt Yourself,” brought the audience to a smoke-filled room with flames everywhere. That’s the hard-kicking rock jam that features Jack White.

Bey opened her final performance with her most popular song from the album, “Formation.” The political slaymaker of a closing track had seemingly everyone in the house on their feet. It was an uninterrupted master class sandwiched into the telecast.

Britney Spears‘s low-energy, would-be comeback performance that followed proved to be a let down across social media. Compared to the Lemonade pour, it was flat and disposable.

You can't lip sync after THAT @Beyonce performance, @britneyspears. #VMAs

someone needs to tell Brit just to forget the mic, we know you don't sing anymore. & that's okay bc you're still the iconic @britneyspears

Can we please rewind and try that again? @G_Eazy @britneyspears

Beyoncé owned the broadcast, also taking home best female video, and dedicating video of the year to the people of New Orleans. She also brought with her to the award show the entire cast of her heralded visual album, including the mothers of Trayvon Martin, Mike Brown, and Eric Garner.