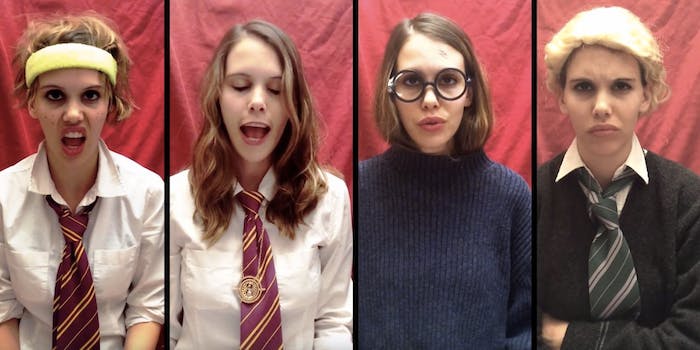 'Welcome to Hogwarts, it's been waiting for you!'

The only thing that could make Taylor Swift’s 1989 better is the infusion of Harry Potter. Luckily, YouTuber Kate Parkin has us covered.

The actress and musician shared a Taylor Swift and Harry Potter mashup that has her playing Ron, Harry, Hermione, Luna, and Draco as they work their way through Swift’s biggest hits.

“Bad Blood” becomes “Mudblood,” while “Welcome to New York” transforms into “Welcome to Hogwarts.” This isn’t Parkin’s first Potter parody by far. She’s also done a Frozen cover called “Do You Wanna Build a Horcrux,” as well as tackled other pop stars like Bruno Mars, Katy Perry, and Lady Gaga.

No word yet if either Swift or J.K. Rowling has seen the tribute, but it’s only a matter of time.

Correction 5:49pm CT: An earlier version of this article mistakenly identified an earlier work by Parkin. The track in question was “Payphone” by Katy Perry.