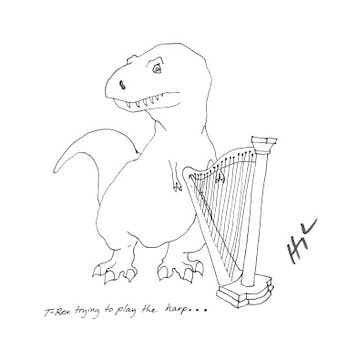 Meet the couple behind T-Rex Trying, the cute new comic that has Tumblr buzzing

The Tyrannosaurus rex might have ruled the Cretaceous period, but in this hilariously animated Tumblr, the dinosaur can't even make a proper snow angel.

During the Cretaceous period, the Tyrannosaurus rex was one of the largest and deadliest predators to roam the earth. Today, it’s one of the funniest.

Inspired in part by Toy Story, T-Rex Trying is a new Tumblr blog that features hilarious hand-drawn illustrations of the dinosaur attempting to use its stubby little arms to load bags into an airplane, eat at a buffet, and steal food from a vending machine.

The blog is the brainchild of Hugh and Sarah Murphy of Los Angeles. The couple started the Tumblr less than a week ago, after four months’ worth of T. rex jokes from Hugh and his brothers.

“I originally started the cartoon to send to my brothers throughout the day to just make them laugh and cheer them up. It just grew from there,” Hugh told the Daily Dot. “When I was a little kid I had a pencil and computer paper and I just drew all sorts of dinosaurs, all sorts of sharks, little kid things.”

Hugh has since upgraded to using a marker, but the rest of the process remains very much the same. Most of the comics were thought up while driving daily to the University of Southern California, where Hugh is a dentistry student and Sarah raises funds for the business school. The idea for the first comic, which features a T. rex trying to paint a house, struck Hugh while he was in the shower last week. It has since become the most popular comic on the site, collecting more than 24,000 notes.

“He was cackling the whole time while he was drawing it,” recalled Sarah, who saw Hugh run out of the shower to draw it. “It was pretty funny.”

Hugh’s quirky illustrations have struck a chord with Tumblr users and redditors, who have helped the blog collect more than 12,000 followers and 262,000 views. In a front-page Reddit post Tuesday, more than 1,100 users complimented the blog on its creativity and jokingly expressed sadness for the extinct carnivore.

“Everyone here is making fun of Tyrannosaurus Rex. Well you know what, reddit? There’s something else T-rexes are really good at, besides playing the ukuele: Preying upon other dinosaurs, eating them, and successfully reproducing for millions of years,” commented JoelQ. “These motherfuckers dominated the Cretaceous period with an iron fist. You know what T-Rex means? It’s Greek for TYRANT OF ALL.”

After seeing the blog take off on Reddit, Sarah started a Spread Shirt store to sell T-shirts featuring the comics. More than 70 have been sold thus far, she said.

T. rex can’t either, but the creature’s trying. 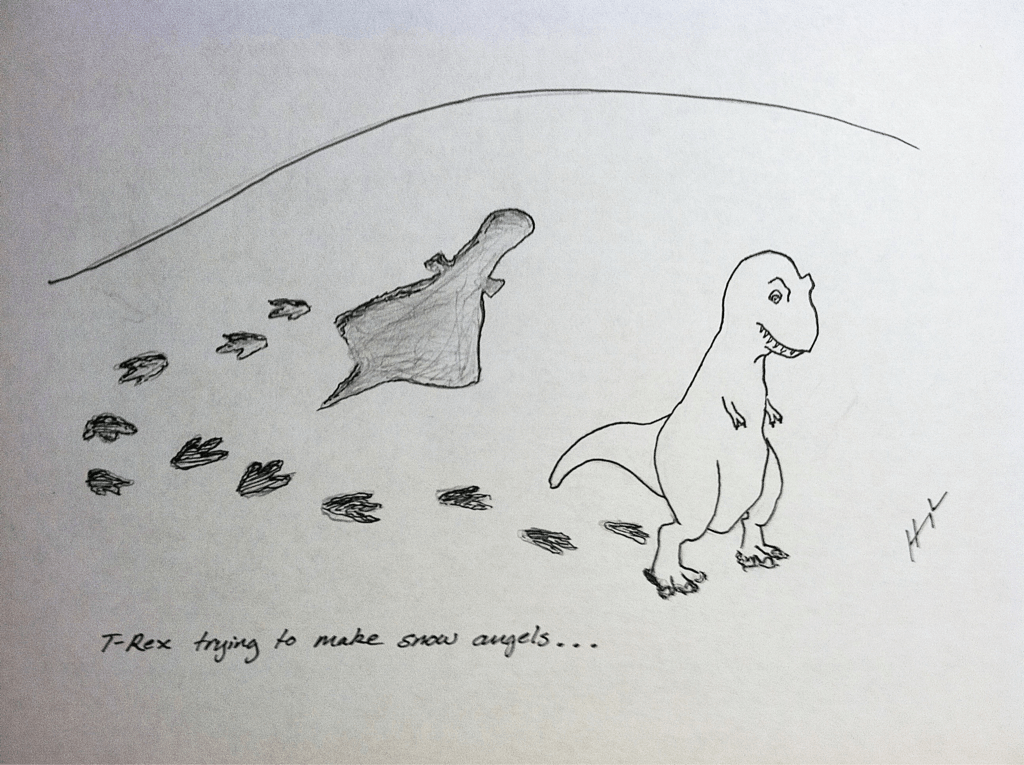