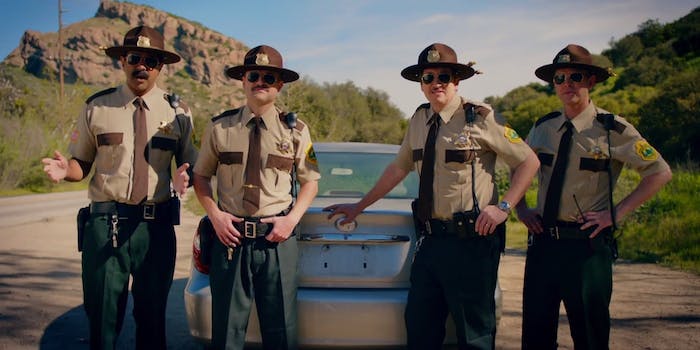 Hint: it's in April.

Super Troopers 2 just got a release date, and something tells us fans are gonna like it.

Earlier in the month, people close to the project revealed that taping for the movie is “done,” which means we’re now at the phase of the process where they start hyping it a bunch. Typically new movies premiere on a Friday, and it just so happens that in April of 2018, a particular weed holiday falls on one. Yep. 4/20, baby.

It hasn’t been officially announced yet, but Steve Lemme (aka Mac in the movie and a founding member of Broken Lizard) recently gave an interview with Seven Days where he coyly hinted at the release timeline. When asked if there had been a date scheduled yet, he said: “There is, but I can’t tell you what it is. Here’s what I can tell you: It’s springtime and there’s a very obvious date, which happens to fall on a Friday this year.”

'Super Troopers 2' gets a 'very obvious' release date on a Friday in the spring of 2018 https://t.co/XJHSEWRXqD pic.twitter.com/jMFh8IFVah

It’s a perfect decision since in legal states (and maybe others, too) smoking pot seems like the exact activity you’d do right before heading to the theater.