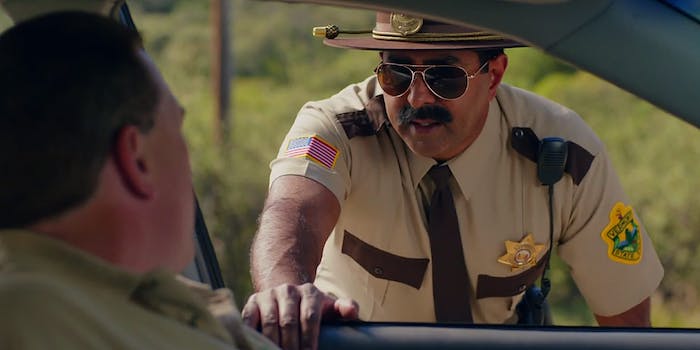 On Wednesday, Kevin Heffernan, who played Farva in the film, posted to the Broken Lizard website to explain that the sequel is in post-production and now they’re just waiting on a release date:

When we have the release date you will be the first to know. That’s when trailers, posters and all the promo materials will launch. It’s painful to wait for this process because we’re dying to share this film with you, but each step takes us closer. Again, we could not have done this without you and we thank you for all of your help.

That last part is certainly true. In 2015, an Indiegogo campaign was launched to help fund the sequel. It collected more than $4 million and became the second most successful Indiegogo campaign, right behind the Veronica Mars movie.

Since its release, the film about Vermont state troopers has become a cult classic. In a 2014 oral history, Heffernan explained the “chickenfucker” scene:

Those are my parents in the car. They said, “Can we be in the movie?” I said, “Yeah, you do this part.” I didn’t tell them what it was and we did like 25 takes with me calling my parents chickenfuckers, which was a fun day.

Fans were very excited, and according to the comments on Heffernan’s post, the common thread seems to be that they want a trailer right meow.