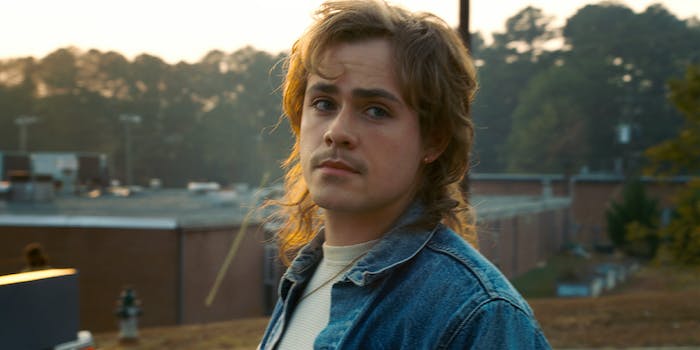 He hints at a more 'sinister' side to Billy's life.

Dacre Montgomery’s Billy is the new bully of Stranger Things season 2, but one plot line has fans scratching their heads.

In Stranger Things’ reference-heavy universe, Billy is an amalgamation of ‘80s bullies: loud-ass Camaro, fond of being shirtless, toxic attitude. As the AV Club noted, he is a “Kiefer Sutherland riddle wrapped in a Rob Lowe enigma.” When his step-sister Max (Sadie Sink) joins the guys’ crew and gets close to Lucas (Caleb McLaughlin), Billy gets upset and warns her to stay away from him. Since this is small-town Indiana in the early ‘80s, one might surmise that Billy is racist—his animosity is never really explained.

Montgomery told Huffington Post that when he “first started reading the description between Billy and Lucas, I was like, ‘Oh, you know, he’s a racist dick,’” but eventually he saw Billy’s anger grew out of being threatened by men like Lucas, former bully Steve (Joe Keery), and, in a more revelatory episode, his dad:

If any of these characters object with that person and his relationship with that person, it’s a threatened kind of behavior. It’s that animalistic side of like, ‘You’re threatening my sibling, my world. What are you doing? Who is this boy who’s trying to weave his way into my life through my sister?’

He adds that though Lucas becomes his “target,” he doesn’t “think it’s about race.” In a later episode we see Billy’s dad use a homophobic slur in a moment of anger, which might offer some insight into who he is. Is Billy really a “perfect Trump-era villain,” though? And is Stranger Things the one show where we can resist making that connection? (No, apparently.)

However, Montgomery says there’s a “far more sinister side” to Billy’s life that might be explored in season 3.