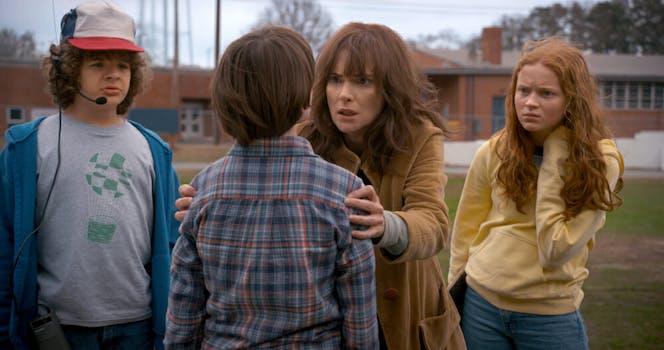 It's a crowd-pleasing sequel you'll be proud to binge.

With high expectations from fans after a stellar first season, Stranger Things is back with season 2 of the hit series just in time for Halloween—it does not disappoint.

In season 1, Stranger Things introduced viewers to the horror of the Upside Down—an alternate, evil dimension—and kept their eyes eagerly glued to each 60-minute episode, waiting to see the next twist or turn in the 1980s-set thriller mystery.

After their friend Will Byers (Noah Schnapp) mysteriously disappears, a nerdy young group of friends and a very determined mother take it upon themselves to find him. Along the way, dark secrets of the town’s sketchy laboratory are revealed and the characters discover the evil of the Upside Down.

The gang of middle school boys, Mike (Finn Wolfhard), Lucas (Caleb McLaughlin), and Dustin (Gaten Matarazzo) are met with a psychokinetic girl escaped from Hawkins lab, Eleven (Millie Bobby Brown), on the search for Will. Despite ultimately rescuing Will, viewers are left with a cliffhanger and many unanswered questions.

Much like the first, season 2’s  plot revolves around Will, who is now suffering from post-traumatic stress and dealing with the aftermath of having been trapped in the Upside Down for so long. The season takes place a year after the last and starts slowly, tying together a few loose ends from the previous season and building up the plot. Season 2 finishes with a bang and reminds us why Stranger Things  is the phenom it has become.

We learn that Will is not the same after returning and still has a strange connection to the Upside Down. Eleven is brought back into the story after seemingly vanishing forever at the end of the first season and the Hawkins lab is still very sketchy. In the end, this season tops the first by perfecting the formula.

A few new characters are introduced early on. The new girl in town, Max, (Sadie Sink) is a feisty, tomboyish redhead who defies gender norms by playing video games and being a skateboarder. A turn of events lands her in the group on the quest to save Will, again, and stop the Upside Down.

Max’s rude, rebellious step brother, Billy (Dacre Montgomery), plays the role of the guy who hates everybody and everything. His character helps to develop Max’s and our understanding of who she is.

Will’s mom, Joyce Buyers (Winona Ryder), has a new boyfriend, Bob (Sean Astin). In contrast to dealing with her children’s absent father, her ex husband, in the first season, Joyce is in a happy, stable relationship. Bob’s role is tragic, memorable, and he’s already a fan favorite.

Throughout the nine episodes of season 2, there are four main storylines that drive the plot. They begin to merge together: Season 2 works, because all four stories are thrilling and interesting.

The main focus is on Will’s struggles of being linked to both reality and the Upside Down. Will’s friends and mother try to cope with the evil that found its way within him. It was a good decision to the keep the plot driven around Will since he had the first encounter with the Upside Down and was central to the mystery.

There is also a strong effort to further develop Eleven’s character. However, viewers don’t learn much more about Eleven that wasn’t already revealed in season 1. At times, it can feel as if Eleven is too distant and the lack of interaction between Eleven and the main characters for the majority of the season is disappointing. But the decision to introduce a “sister” who also is psychokinetic and escaped from Hawkins lab, Eight, provides her with a compelling and effective teacher to help channel her powers.

Dustin meanwhile finds and houses what may or may not be a baby demogorgon. Finally, Nancy (Natalia Dyer) and Will’s brother Jonathan (Charlie Heaton) team up to avenge season 1 casualty Barbara. Together they successfully expose Hawkins lab for being corrupt and even spark a little romance with each other along the way.

Similar to the first season, Nancy is caught between popular jock Steve (Joe Keery)—who transformed into a decent guy after nearly dying in the first season—and the nerdy Jonathan. Despite having a  few moments with Jonathan, it is still unclear whether or not she will get back with Steve or start something new Jonathan. It’s a love triangle built for social media: Are you team Jonathan or team Steve?

There’s bound to be some retread from season 1 to pay fan service for a breakout hit that rode a wave of ’80s nostalgia and timely Halloween costumes. Joyce Byers again turns her house upside down to figure out the Upside Down. This time she’s not hanging dozens of strings of Christmas lights around the house, but with her strong intuitive reasoning and motherly senses, Joyce discovers that tons of creepy drawings by Will are pieces to a puzzle.

Joyce’s character keeps the show interesting and the combination of her being a typical, overly worried mom mixed with a badass, Upside Down-fighting warrior makes her presence in the show priceless.

Of course it wouldn’t be Stranger Things if it gave us a normal ending. The end of season 2 reveals that it’s not over and evil is still lurking. But the show is also grappling with where to take its coming-of-age actors. Impressed by her Dig Doug skills, Lucas and Dustin instantly fall for Max, the new girl at school. The two spend the entire season trying to impress her. This young love triangle reveals that the boys are getting older, and girls are no longer gross and weird.

Netflix baked in Beyond Stranger Things as a companion to the series, a discussion about the season with writers and directors Matt and Ross Duffer and cast members of the show. This talk show extra includes seven 15-25-minute episodes.

Here we learn that the plan is for the kids to move on to high school in season 3 and possibly 4. Given the success of Netflix-streaming high school dramas like Riverdale and 13 Reasons Why, that dynamic will take the core cast beyond an It-inspired mystery and into the most fertile horror setting there is. Lots of weird stuff is apparently ahead, but if it’s as sharply engineered and fun as season 2, we’re in good hands.