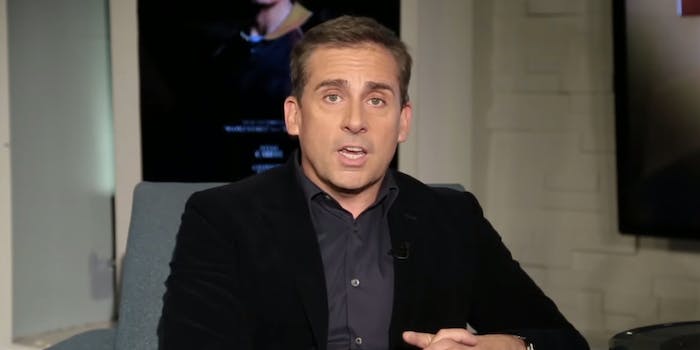 Steve Carell is the latest victim of Swift-fever. The Office alum was asked to sing whatever song was in his head during a recent appearance on ABC News to promote his new film “Foxcatcher.”

“I just want to know the music that’s in your head. I just want a snippet of what’s going on in there,” host Peter Travers prompts.

Without hesitating Carell breaks into Taylor Swift’s don’t-sweat-the-haters single “Shake It Off.” It’s not even close to key but Carell has clearly played 1989 more than once because he owns those lyrics. He even goes for the high notes when it comes to the “Shake It Off” chorus and the whistle “ooh’s” in between.

Considering Carell is promoting a movie where he plays a sadistic wrestling coach, T-Swift isn’t really the soundtrack you’d expect. It just goes to show what a global phenomenon Swift has become—and how ridiculously catchy that song is. However, Travers wasn’t ready for Carell’s rendition either.

“That’s the last thing I ever expected,” Travers says through his chuckle, “Is that constantly playing in your house or what?”

“I love it,” Carell responds with absolutely no shame (not that he should have any). “I actually love Taylor Swift. I think she’s great.”

Travers goes on to suggest that Swift and Carell should team up for a movie. Admittedly, that would be pretty amazing — but Carell should probably leave the singing up to Swifty no matter what they do.

Check Carell in the Foxcatcher trailer below, which is a stark contrast to his T-Swift karaoke moment.

Foxcatcher is now in theaters.