Stephen Collins has been messaging young female fans for years

Most celebrities interact with their fans on Twitter, but this is a little weird.

As the star of one of the most popular TV shows of the ’90s, Stephen Collins, who portrayed Reverend Eric Camden on 7th Heaven, predictably has lots of fans who came of age during the social media era, and it’s not that surprising that he’d interact with his fans on Twitter. But in light of the actor’s recent hidden audiotape confession that he’d molested at least three underage girls, Collins’s interactions with fans are starting to look a little shady.

According to a Daily Dot tipster, the actor, who has been on Twitter since 2009 and has more than 34,000 followers, has been sending DMs to young female fans for years. Although one user the Daily Dot reached out to said the actor told her he didn’t follow fans on Twitter, a quick glimpse at the list of users he’s following indicates that many are younger girls. (If their bios didn’t indicate whether or not they were of age, we blurred some of the names and photos associated with the accounts.)

Oh, this? This is just THE Stephen Collins personally responding to my marriage proposal via DM.

Remember that one time I said I was DTF the Rev. Camden? I take that back… pic.twitter.com/2nKLwTuxjl 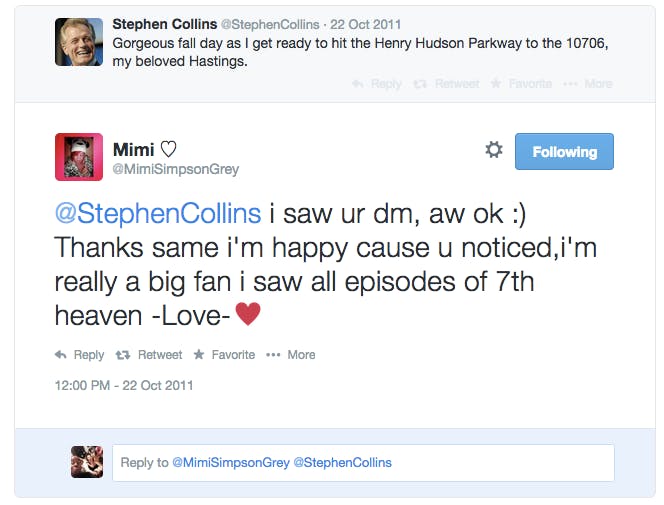 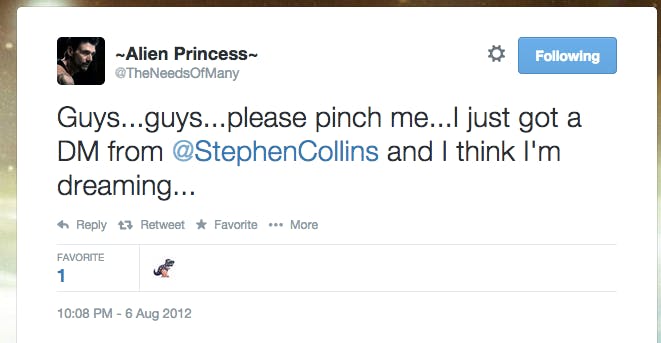 To be fair to Collins, it seems like he’s generally pretty interactive with his fans on Twitter, and his habit of sending DMs to fans isn’t restricted to teenage girls. Furthermore, from what I could tell from the few women I got in touch with, most of the messages he sent to them were relatively innocuous. (In fact, the one asking what “DTF” means is positively quaint.) But given the amount of evidence stockpiling against him, including one victim who recently came forward alleging that Collins molested her when she was 10 years old and living in his apartment, sending private messages on social media to young female fans might not be the wisest move right now.