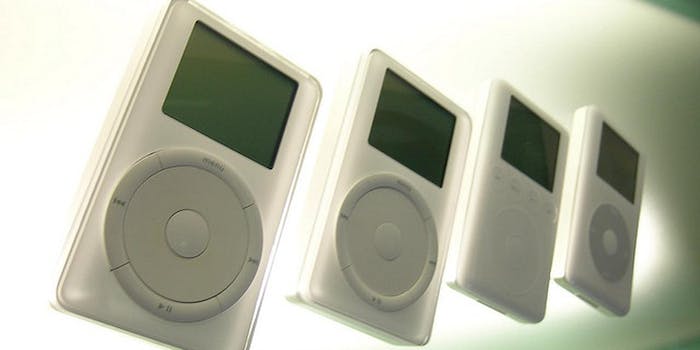 A Spotify sendoff for the now-deceased iPod line

In the wake of Apple’s new product circus on Tuesday, it was revealed that the company had discontinued its iconic iPod Classic. No formal announcement was made: it was quietly removed from the Apple Store, but not from our hearts.

Where to buy the last iPod classics as Apple stops online sales http://t.co/Np0tJATF7W

The revolutionary mp3 player burst on the scene in October 2001, and the world of on-the-go music was forever changed. The little white rectangle became the ultimate cool-kid accessory, and we were all tantalized by the click-click-click sound it made as you flicked through your songs with the circular scroll wheel.

The device went through many generations of updates, but the iPhone has finally rendered the gadget obsolete. Let us observe a moment of silence for this fallen tech angel.

Okay, now that that’s done, it’s time to celebrate the beautiful life of the iPod with a New Orleans-style funeral. We’ve compiled a playlist of songs that were surely on your first generation iPod as a 2001/2002 youth. Britney! The Strokes! Smash Mouth! An incredible time to have been alive.

Sit back, relax, sip a Surge, and enjoy. (Then, because this is a collaborative playlist, we hope you’ll add your own selections. Don’t be shy!)