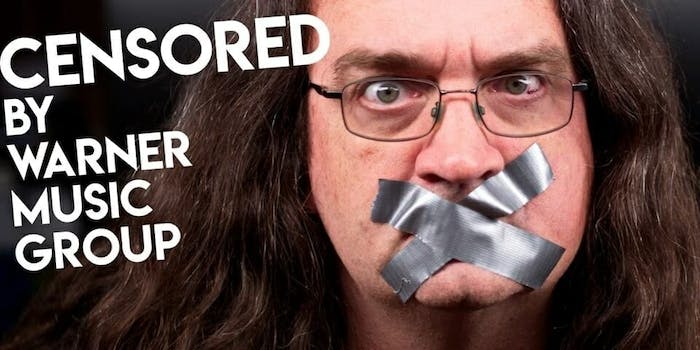 Why did Warner Music block this YouTube video that makes fun of bad songs?

'It seems like I have to spell it out for the meatheads at Warner doing censorship duty.'

Five years after a YouTube music channel uploaded what turned out to be one of its most popular videos, it’s been blocked because of a copyright claim. And Glenn Fricker, who runs the SpectreSoundStudios channel, is screaming mad about it.

In July 2014, he uploaded a video titled “The Fans Deserve Better” in which he used short clips from Iron Maiden and Asking Alexandria to illustrate the good and bad about music production. But now he said that Warner Music Group (WMG) has copyright claimed the video and blocked anybody from seeing it.

Normally, when a person or company copyright claims a YouTube video, the ad revenue that originally was going to the content creator automatically goes to the claimant instead. But in this case, WMG made sure nobody can watch it.

“It was clearly an editorial piece and therefore protected by fair use doctrine, specifically the comment and criticize portion,” Fricker said in his video. “It seems like I have to spell it out for the meatheads at Warner doing censorship duty. Editorial commentary is protected. Just because somebody says something you don’t like about the crap-tacular product you’re shilling to the public does not give you the legal authority to censor it—even if they use a clip for a product you own copyright to.”

Fricker said he used a pair of 11-second clips in 2014 video. One was for Iron Maiden’s “The Number of the Beast” so he could describe how good a vocalist could be when pushed to their limit. The other was for an Asking Alexandria song which he gleefully bashed the sing. Both bands are in partnership with WMG.

“Yeah, that’s what I signed up to YouTube for, so I could indirectly work for a music label,” Fricker said sarcastically. “Fuckers.”

The copyright claim system has been aggravating YouTubers for months, if not years. It’s affected well-known YouTubers including TheFatRat, AngryJoeShow, Smelly Octopus, Star Wars Theory, and Dash Cam Owners Australia. Earlier this year, two gaming YouTube channels were given copyright strikes and extorted to prevent the deletion of their channels, and a YouTuber said a British company claimed his video because it showcased the Kenyan national anthem.

The next step for Fricker would be to appeal the copyright claim. But that claim doesn’t go to YouTube—the platform has told the Daily Dot that it doesn’t want to be in the position of arbitrating these kinds of copyright disputes. Instead, the appeal goes to the original claimant, meaning WMG would be the one to decide whether its copyright claim on Fricker’s video was fair.

Fricker could continue to appeal the process, but that could result in additional punishment against his channel. In some cases, though, public pressure has forced corporations to release the copyright claim, giving back the original content creator their video and ad revenue.

He also could edit out the clips from the video and re-upload it.

“That’s something I’m not really wanting to do,” he said. “I don’t want to dilute my message in order to please some people at Warner.”

For now, Fricker said he’ll appeal the copyright claim and hope for the best, even though “I don’t have much hope for a positive outcome.”

A Daily Dot message to Warner Music Group was not immediately returned on Wednesday.