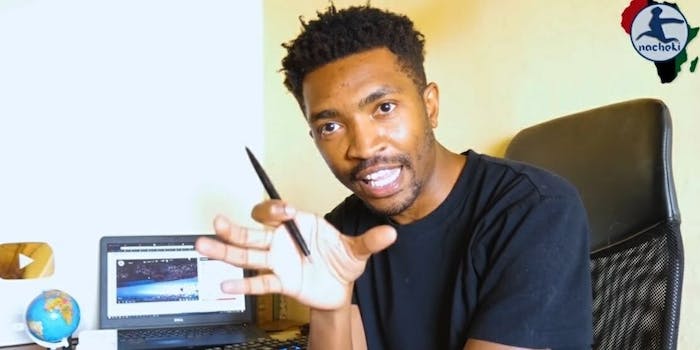 YouTubers have howled in protest lately because companies and people have falsely taken their revenue by claiming a copyright on content they produced. But the latest news from Kenya seems outrageous.

Earlier this week, a YouTuber named 2nacheki, who has more than 217,000 subscribers, said a recent video of his that featured the top 10 national anthems of Africa was copyright claimed by a British music company. De Wolfe Music Company claimed it held the copyright on Kenya’s national anthem, meaning the money 2nacheki earned on his video would go to De Wolfe.

2nacheki disputed the claim, but that oftentimes leads a YouTuber nowhere since the person or company who made the copyright claim then gets to decide whether to grant the appeal.

2nacheki said he believed Kenya’s national anthem was in the public domain, but after investigating the matter, he said he discovered De Wolfe claimed to own a version of it.

“Why would such a company own it?” he asked in a new video uploaded after his top 10 list vlog had been claimed. “A Kenyan YouTuber can not make money out of it, and it’s claiming that the Kenyan national anthem that a Kenyan is using to critique and educate other Kenyans and Africans belongs to them. [De Wolfe] is currently taking revenue, running ads on the video, and is taking revenue from the national anthem of Kenya.”

The Kenya Copyright Board responded to that video on Twitter, saying the anthem was in the public domain after 50 years of holding its copyright (the anthem was adopted in 1963). But it also said the country had laws to protect the anthem against “misuse and improper use.” It said De Wolfe’s claim could not be supported.

Copyright claims on Kenya National Anthem by Dewolfe Music and others are invalid. We are working to remedy this situation. pic.twitter.com/EUJPEdgeg5

De Wolfe told Nairobi News that it did not own the anthem and that the company that claimed 2nacheki’s video on De Wolfe’s behalf was mistaken.

“We do not own, or claim to own, the copyright to the Kenyan National Anthem, most National anthems are non copyright and are in the public domain, due either to their age, or by legislation making national symbols copyright-free,” De Wolfe said, via the Kenyan news outlet. “We have a sound recording of this work but we do not claim any other ownership and have never copyrighted ownership of the composition as this in the public domain.”

De Wolfe also released the claim on YouTube, according to 2nacheki.

It’s yet another example of a third party falsely copyright claiming a YouTuber’s content. It’s affected well-known YouTubers including TheFatRat, AngryJoeShow, Smelly Octopus, Star Wars Theory, and Dash Cam Owners Australia. Most recently, two gaming YouTube channels were given copyright strikes by an outside party and extorted to prevent the deletion of their channels.

YouTube, which did not immediately respond to a Daily Dot request for comment on Wednesday, employs teams who are dedicated to stopping copyright claim abuse, and it’s banned hundreds of people and companies from doing so. But if the past few months are any indication, it seems likely that this issue will continue to frustrate those who are making content—and expect to make money from it—on YouTube.