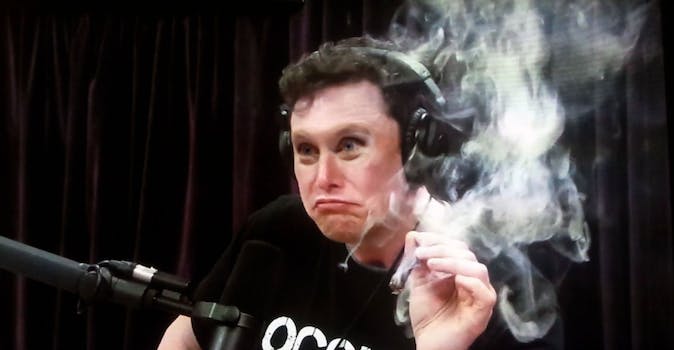 Behold these photos of Elon Musk, but with Elizabeth Holmes’ eyes

Some things you can't unsee.

We should have seen it coming.

Elon Musk, the tech mogul to the stars, has for the past year become an unbuttoned fixture on the internet. He’s a meme-wielding disruptor (on weed) not afraid to hang out with PewDiePie. He’s leaned into his status as a meme machine—and the kids online love it. But this month, the most jaw-dropping figure in tech is Elizabeth Holmes, a controversial and allegedly fraudulent figure at the heart of a spicy HBO documentary, The Inventor: Our for Blood in Silicon Valley. Her voice is different, she seems to have hoodwinked investors with out-there ideas about DNA testing, and the story of her company Theranos has shocked and outraged audiences.

The photo seems to have come from Boing Boing illustrator and editor Rob Beschizza, whose initial tweet caught our attention on Friday. Sometimes, media people on Twitter chat about Robert Mueller, and sometimes all the fuss is about a jarring and weird-as-heck photo that speaks to the moment. This mashup is a reminder that the most powerful people in the world forge their own ways with machetes to tall grass—and it’s almost alive with purpose.

It’s also fair to compare the two iconoclasts: Holmes is at the heart of the controversy, sure, but pushing ambitious ideas that may not be feasible is something Musk has built a career on. Few have given him the same level of ridicule.

In any case, the photo of Musk with Holmes’ eyes is with us now. May God have mercy on us all.

Go inside the global network of Elon Musk super fans with 2 GIRLS 1 PODCAST: