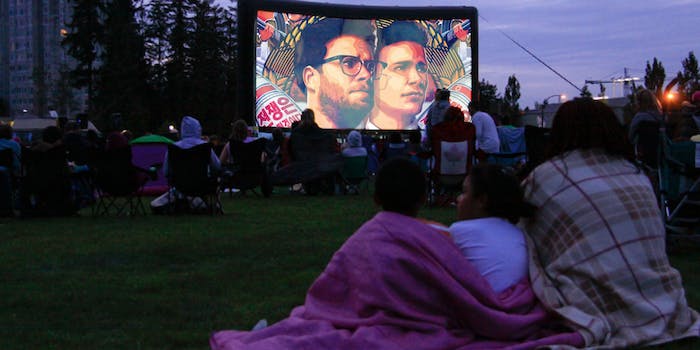 Breaking: ‘The Interview’ is coming out after all

A tweet sent out by the Tim League, the founder of the Texas-based cinema chain Alamo Drafthouse, indicates that Sony has decided to allow screenings of The Interview.

Breaking news: Sony has authorized screenings of THE INTERVIEW on Christmas Day. We are making shows available within the hour. #Victory

The Plaza Theater in Atlanta has also announced Christmas Day showings of the movie on its Facebook page.

Earlier this month, Sony announced it was abandoning plans to release the film after a group of hackers calling themselves the Guardians of Peace breached its computer systems and released a massive trove of internal emails online. The group, which the U.S. government insists is working as part of the North Korean government, also threatened physical violence reminiscent of the 9/11 attacks if any theaters showed the film.

The Wrap is reporting that Sony also plans to release the movie through video on demand on Christmas Day.

The Interview drew the ire of the North Korean government for its depiction of the assassination of the country’s leader, Kim Jong-un.

After President Obama insisted that Sony’s decision to scrap the film was a “mistake,” Sony executives began saying that they did eventually plan to release the movie in some fashion.

A group of independent theaters called the Art House Convergence, which includes the Alamo Drafthouse, has circulated an online petition calling on Sony to release the movie.

After Sony initially pulled the film, Alamo Drafthouse attempted to replace it with a showing of Team America: World Police, a movie that featured previous North Korean dictator Kim Jong-il as its primary antagonist, but Paramount Pictures similarly blocked that film from screening.

The Interview‘s Twitter account, which was taken down when all other advertisements for the film were also pulled, has since reappeared, but has yet to tweet anything.

Tickets for the Alamo Drafthouse screening of the of The Interview at its theater in Richardson, a suburb of Dallas, are on sale here.

Update 11:55am CT: Sony has confirmed the “limited theatrical release” in a press release.

The statement further implies that there could be additional release news on the horizon, so stay tuned for more information as it becomes available.

Update 1:07pm CT: Drafthouse CEO Tim League has issued an expanded statement in which he explained that logistics about tickets and locations are still being worked on. He added: “This is the best Christmas gift anyone could give us. We, both distributors and exhibitors, have collectively stood firm to our principles and for the right to freedom of expression.

Two days til Christmas, and I am proud to be an American.”

Photo by waferboard/Flickr (CC BY 2.0) | Remix by Jason Reed