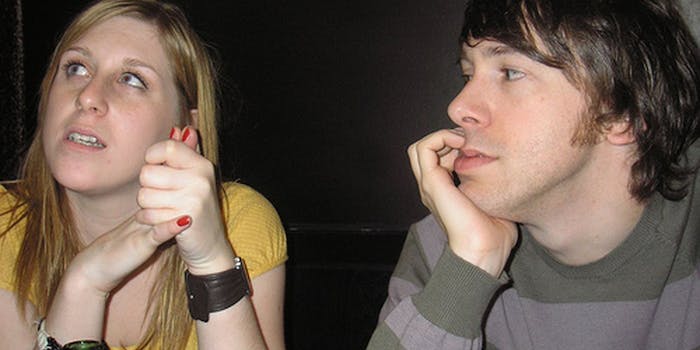 Signs your date is bored

If you're reading this while on a date, you're probably being a tad rude.

It’s springtime in the northern hemisphere, the time when “a young man [or woman]’s fancy lightly turns to thoughts of love,” as the poet Tennyson said. Of course, when you fall in love with somebody, there’s always the danger your interest won’t be reciprocated. But how can you tell? You could try checking Twitter, where “SignsUrDateIsBored” started trending Wednesday—although if your dates actually behave like the descriptions on most tweets, consider the possibility that you’ve been dating the wrong kind of people.

Ever since cell phones became commonplace, etiquette maven have insisted that it’s rude to ignore whomever is with you to chat on the phone instead. Yet people still do this, even on dates, so countless phone mentions got the bored-date hashtag:

“[W]hen that cellphone gets pulled out”

But “paying more attention to your cell phone than the person physically next to you” could just as easily be considered a sign your date is rude. A polite person on a boring date will at least attempt to dissemble, though sometimes it’s hard to keep your attention from wandering, so observations like “they keep looking at diff parts of the resturaunte” and “she starts reading the Menu like its an Ebony magazine AFTER u already ordered!” made the list.

And sometimes, people just run out of things to say: “that awkward silence”.

It is, of course, a bad sign (in more ways than one) if your date starts committing potentially fatal acts of violence: “she stabs someone with her cutlery just to add some excitement to the night.”

Some Twitterers were embarrassed to recognize themselves in the tweets of others: “Omg I’ve done this RT [re-tweet] … starts talking about how you and her friend would be perfect together, lol.”

Of course, tweeting on a topic like “Signs your date is bored” suggests that you, personally, have dated someone who felt boredom in your presence. Some people swore they found the very idea hard to fathom: “#SignsUrDateIsBored – how am I supposed to know this?”