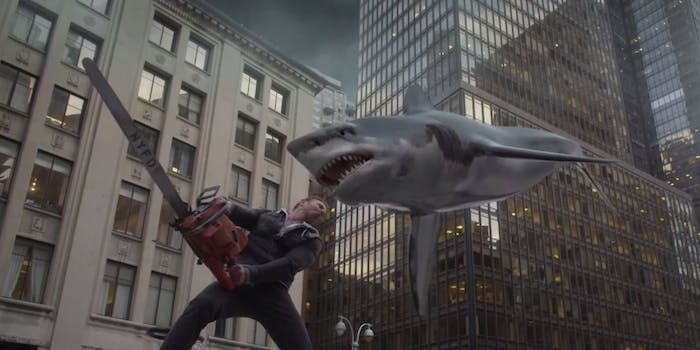 Did you miss the cinematic event of the summer?

By no means did anyone think that Sharknado, a hokey TV movie on SyFy starring Ian Ziering and Tara Reid, would be any good. So when millions of people tuned in to snarkily livetweet it last summer, they pretty much got what they expected: bad acting, cheesy CGI, enough shark puns to make more than a few drinking games out of it, and as everyone hoped, a bunch of sharks in a tornado.

Jumping the shark wasn’t a sign of the end—it was a plot point.

It was so bad it was good—and popular enough to garner a sequel—and a third movie before the second even aired.

Sharknado 2: The Second One had a lot to live up to with its sharks tearing their way through New York, but for whatever reason, you didn’t watch it.

Did you think you were above a movie about tornadoes full of sharks? Or were you, like yours truly, stuck somewhere that wasn’t in front of a TV during it? And there’s no way you can watch it later on the DVR; it’s just not the same when you’re watching alone and not with all of Twitter. At that point, you’re just watching a terrible movie with all of the fun sucked out.

But, how do you play that off? Sure, you could cop up to it, but the fear of missing out at the water cooler, whether literal or figurative, might be too much for you. And actually watching it is out of the question, whether for pride or lack of time.

Well, you could just read a recap, or you can relive the Twitter experience for yourself, and hopefully you can convince your friends that you actually saw the movie. Here’s our recap, brought to you by Twitter.

Some sharks attacked a plane, sparking a thousand “sharks on a plane” jokes.

Tara Reid’s character wrote a book on how to survive a Sharknado despite not doing that much in the first movie, and even better, you can actually read it.

Yep, the #Sharknado book is real. Also tells how to survive a Boaricane. http://t.co/VnmuONLN3k #Sharknado2TheSecondOne

The sharks attacked the Mets and provided a homerun and enough implausibility to make sports fans raise some eyebrows.

A lot of sharks were killed in a variety of creative ways, and it even rained.

Just when I thought Jasmine the stripper in #IndependenceDay was @MsVivicaFox‘s best work! #Sharknado2 pic.twitter.com/MHbMugRWHw

And my super soaker! And my sword! And my axe! #SHARKNADO2

Wil Wheaton     (who had a death cameo early in Sharknado 2) called one of the big twists early in the movie.

If Tara Reid doesn’t end this movie with a chainsaw for a hand, I don’t even know why we got out of bed today. #Sharknado2

Those sharks finally made the five-day forecast.

BREAKING: #Sharknado has made it to Long Island Sound. Tracking their approach into New England at 11. pic.twitter.com/2FanoYNpnq

Your favorite morning hosts got in on the blood and rampage—and Matt Lauer stabbing a shark is a thing that actually happened.

There was even some romance.

If that wasn’t enough for you, you can always watch the movie. But you better cancel your plans the night that Sharknado 3 makes its way to TV.