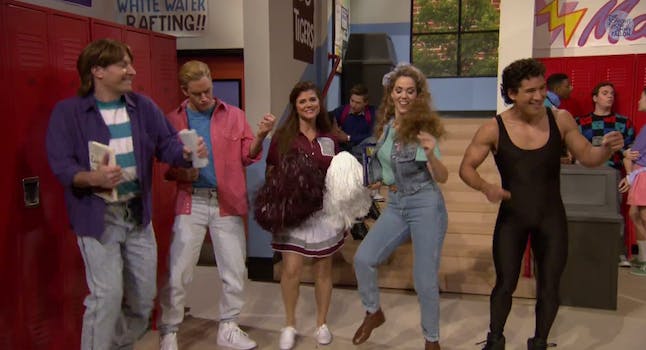 Can you believe it's really happening?

What’s the best way to tell if you were a 90s kid? It’s certainly not by taking pointless online quizzes or even by looking at the birth date listed on your driver’s license. The answer is simple. You’re a 90s kid if the words “Saved By The Bell reunion” give you the sort of instant high you vaguely remember Nancy Reagan warning your older brother about.

It’s a dream that has remained elusive—until now. On Wednesday night, Jimmy Fallon got the SBTB gang back together, and intense nostalgia ensued. Not only did the Tonight Show host reunite the cast of the beloved teen sitcom, but he recruited them for a segment imagining himself as a student at Bayside High.

The reunion didn’t feature the entire cast. Dustin Diamond, who played Screech and was arrested late last year for carrying a concealed weapon and reckless endangerment, wasn’t there. Nor was Lark Voorhees, who played Lisa Turtle and whose mother told People she had been diagnosed with bipolar disorder.

The segment was part of Fallon’s weeklong working vacation in Los Angeles that has seen the host insert himself into more than one classic L.A.-based sitcom. Earlier this week, Fallon opened his show with a shot-for-shot remake of the intro to The Fresh Prince of Bel-Air.

All in all, how did the reunion make us feel? Some combination of both excited and scared.