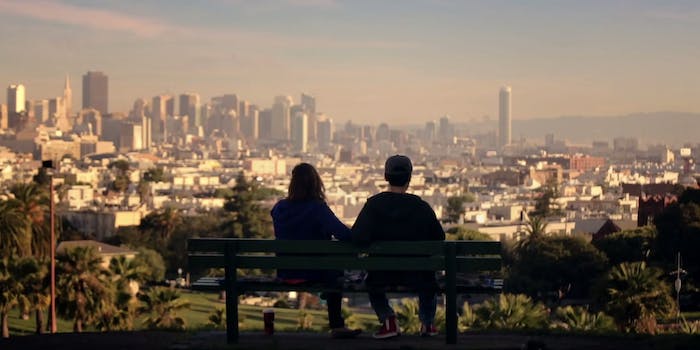 ‘SanFranLand’ wants so badly to be something it’s not

Its characters are the archetypes refined by decades of studios’ market research: the ditz, the solid one, the man-eater.

The new webseries SanFranLand is like every sitcom you’ve ever seen. That’s not necessarily a bad thing, but does anyone want to watch a watered-down Sex and the City when there is so much else competing for your specific tastes?

Independent webseries can be roughly divided into four categories. There are those featuring celebrities that live or die on their stars’ appeal. There are gay webseries (of which there are thousands), and there are those that target certain subgroups or narrow interests that aren’t traditionally serviced by the mainstream channels.

Then there are those that ape formats from television; that is where SanFranLand lies.

It is straining to be broadcast. Its 12 episodes are short, but it is structured like a romantic sitcom. Its characters are the archetypes refined by decades of studios’ market research: the ditz, the solid one, the man-eater.

Even the boiled-down synopsis—“following three single young women as they enter modern San Franciscan adulthood”—is, bar the city, interchangeable with any number of programs.

But in its attempt to be like the things that are most popular on our television screens, it fights a futile battle. Webseries of the first three categories can succeed because, in their own way, they are niche. They exist out of necessity, filling voids created by time and financial constraints of larger producers.

But whereas those programs are essentially alone in their field, SanFranLand sets itself alongside its influences in a competition it can never win. There’s no reason why a webseries of this type cannot be good, but when you consider the talent and money involved further up the sitcom food chain, it would be miraculous if a webseries targeted at the mainstream like this could surmount its handicap and be recommended over its better-funded kin.

That’s not to suggest that SanFranLand is bad. It surely isn’t—it’s just that it is difficult to warm to something that’s being done better elsewhere. It’s pleasant enough; there are some nice set pieces, and San Francisco is a beautiful backdrop. Making a series such as this is a large undertaking, and I would hate to diminish creator/producer Ryan Lynch’s achievement in getting this out there, but within a few minutes, you’re either going to be wanting to fire up TiVo, clicking over to videos of drain fishing or watching something by a true oddball—after all, that’s where the Net’s strength currently lies.